BOZEMAN, Mont. – A Gallatin County man is facing a felony charge after reportedly pointing a pistol at a truck driver on Interstate 90 near Bozeman.

Cole Aaron Smith, 27, was charged with assault with a weapon and was seen in Gallatin County Justice Court on Thursday morning. Smith faces a $10,000 bail and his next court appearance is set for Dec. 21. 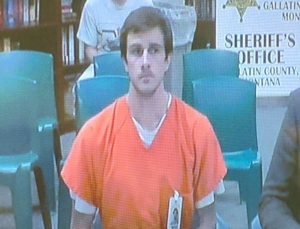 According to charging documents, Bozeman Police responded to a call from a driver on Wednesday, Nov. 28, at approximately 8:06 a.m. who stated a man had pointed a gun at him near the 19th Ave. ramp on I90. The driver followed the man’s car after it left the interstate on the East Main exit and reported the car’s license plate, which officers located traveling westbound on College Street.

After a high-risk traffic stop, Smith was detained without incident. Officers reportedly could see a 1911-style semi-automatic pistol on the passenger side floorboard of his car.

Smith reportedly told an officer that he was trying to get onto the interstate from “the Costco area” and had difficulty merging due to a semi-truck with was traveling in the same direction. After the truck passed, Smith said he decided to pass the vehicle and “flip him the bird.” Smith said the driver of the truck then made an obscene gesture back and he reached down and pulled his concealed-carry weapon up.

The driver of the truck told officers that he was driving eastbound on I90 and was unable to change lanes to allow Smith to merge into the interstate. As Smith was passing him, he pulled next to him and pointed a pistol at him. The driver said he was afraid Smith was going to shoot him and wanted to press charges.

During a search of Smith’s vehicle, a Kimber 1911, .45 caliber pistol was recovered. The pistol reportedly had a magazine loaded with 8 rounds of ammunition and an empty chamber.