The Montana Highway Patrol says the woman was seriously injured when a three-quarter ton pickup slammed into the back of her small car. 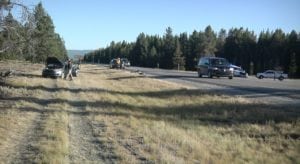 Trooper Marcus Cook says both vehicles were northbound about five miles north of West Yellowstone at the time of the crash.

“The vehicle in the front, was slowed or stopped attempting to make a left-hand turn, according to the husband,” said Cook. “The left-hand signal was actually activated. The vehicle behind them failed to realize that they were slowing or stopping and rear-ended them and shoved them into this lane here in the ditch.” 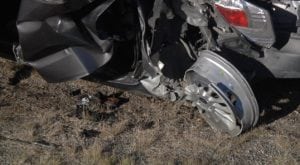 The driver of the pickup was uninjured.

The crash reduced traffic to one lane on 191 for about an hour and a half.

Drugs or alcohol are not considered factors in the crash but Trooper Cook says it’s important for drivers to pay attention to the roadway, especially as we head into the holiday weekend.