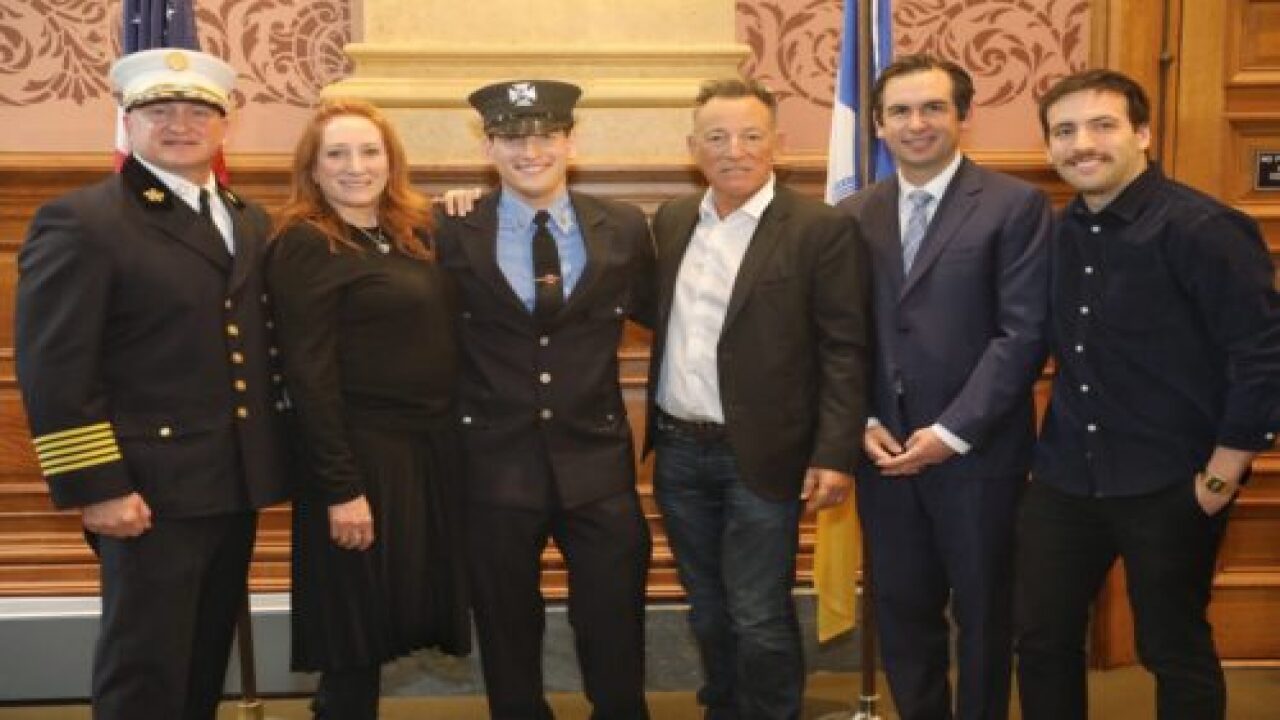 Rocker Bruce Springsteen may have been born to run, but his son, Sam Springsteen, was born to save lives. On Jan. 15, the younger Springsteen was sworn in as a Jersey City, New Jersey, firefighter.

The 26-year-old was among 15 new firefighters entering the profession during a ceremony at City Hall. He graduated from the Monmouth County Fire Academy in 2014 and also served as a volunteer firefighter with several different stations, including Colts Neck Fire Department in Colts Neck, N.J.

Jersey City Mayor Steven Fulop took to Twitter to share some photos of the Springsteens, including Bruce’s wife, Patti Scialfa, from the event and express his congratulations to all the new firefighters:

The Boss @springsteen + Patti visited us in #JerseyCity City Hall today. They’re such nice ppl. We got to spend some time in my office talking about music but more than that they’re proud parents of a new JC Firefighter. Congrats to all the new FF joining the best FD anywhere. pic.twitter.com/oU95Aj9JWv

“The Boss @springsteen + Patti visited us in #JerseyCity Hall today,” he wrote. “They’re such nice ppl. We got to spend some time in my office talking about music but more than that they’re proud parents of a new JC Firefighter. Congrats to all the new FF joining the FD anywhere.”

Scialfa, of course, also supports her son wholeheartedly. In August 2019, Scialfa took to Instagram to express her pride in his accomplishments:

A post shared by Patti Scialfa Springsteen (@officialrumbledoll) on Aug 1, 2019 at 10:33am PDT

“CONGRATULATIONS,” she wrote in the caption of the black and white photo of her son. “You followed your dreams … JC firefighter … Stay safe … love your brave heart.”

What a great message from a mom! And Sam’s dad is proud, too, of course.

“It was a long road, he’s very dedicated, quite a few years and we are just excited for him today, ” Bruce told CBS 2 after the ceremony.

Sam is the couple’s youngest son. Bruce and Patti also share son Evan, 29, and daughter Jessica, 28. Evan has followed in his dad’s footsteps with a career in music as program director and host for Sirius XM satellite radio, while Jessica is an accomplished equestrian.

“If I can wish for anything for my children, it’s that they can pursue their dreams and know that if things don’t work out, it’s OK,” Bruce told Express of his hopes for his brood. “Patti and I will always be there for him.”

Congratulations to Sam Springsteen, and all his new fellow firefighters, on this amazing milestone!

This story originally appeared on Simplemost. Checkout Simplemost for other great tips and ideas to make the most out of life.

Related stories
Copyright 2020 Scripps Media, Inc. All rights reserved. This material may not be published, broadcast, rewritten, or redistributed.