The Roosevelt County Sheriff’s Office says that David Warran Yost has been charged with several felonies after he was caught with drugs and guns following a high-speed chase.

Roosevelt County Sheriff Jason Frederick said in a Facebook post that at about 9 p.m. August 13, a Sheriff’s deputy tried to stop a Pontiac Grand Prix near Brockton for speeding and careless driving. 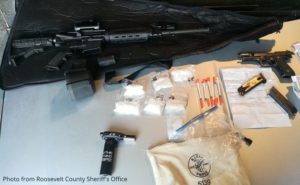 The driver, later identified as Yost, refused to stop and drove east at speeds of more than 100 miles per hour.

Yost was taken into custody and a search warrant was obtained for his vehicle.

Deputies then seized nearly a half-pound of suspected methamphetamine, a stolen AR-15 rifle with a fully loaded 60-round drum magazine, several items of drug paraphernalia, approximately $2,600 cash, and a loaded Beretta 9mm pistol.

Yost was charged with several felonies and traffic-related offenses, and is currently incarcerated in the Roosevelt County jail.