BOZEMAN – As sheep across the country are shorn of their winter fleeces, wool samples are once again piling into Montana State University’s Wool Lab.

Devon Ragen, who became Wool Lab director in February, is taking it in stride.

The wool samples, which are packaged in small plastic bags, have been sent by sheep ranchers throughout Montana as well as from far-flung states including Michigan, Pennsylvania and Georgia.

MSU’s Wool Lab is one of the only facilities in the nation that provides detailed analysis of wool quality — valuable information for ranchers when it comes to selling their product and breeding their flocks.

Ragen is already well-practiced with the lab’s primary tool, a computerized device that scans a finger-sized piece of wool and measures the diameter, curvature and variability of the fibers.

Fine, soft wool will fetch a higher price and be made into shirts or underwear worn against the skin, Ragen explained, while coarser wool will be used by hand-spinners or to make carpet or insulation.

In mid-March, Ragen took a portable fiber analyzer to Helle Rambouillet, a third-generation sheep ranch near Dillon that supplies wool to Duckworth Co., a Montana maker of T-shirts, socks and other woolen goods. Over the course of three days of shearing, Ragen measured the fibers from more than 1,500 fleeces to ensure that Duckworth would receive the consistently fine, soft wool it needs.

The Wool Lab was established and funded in 1945 by the Montana Legislature in response to wool growers’ calls for a facility that could provide them with technical information to improve their flocks. That was a great investment, according to Pat Hatfield, head of the Department of Animal and Range Sciencesin MSU’s College of Agriculture.

“Montana has the best wool in the nation, and that has a lot to do with the Wool Lab here,” Hatfield said. For decades, MSU’s wool programs have focused on helping the state’s producers breed sheep with high-quality wool, he said, “and you can’t do that without the analytical data.” 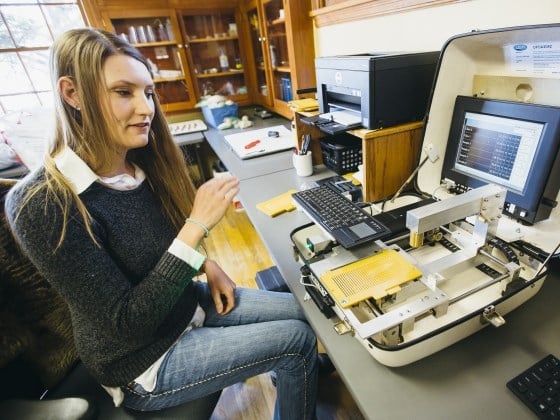 Devon Ragen demonstrates use of a portable wool fiber analyzer at the Wool Lab on the campus of Montana State University in Bozeman on Monday, March 19, 2018. MSU Photo by Adrian Sanchez-Gonzalez

According to the Montana Wool Growers Association, Montana ranked fifth in the nation for its wool crop in 2016. The state’s ranchers produced 1.8 million pounds of wool valued at $3.42 million.

Each year, the Wool Lab receives more than 10,000 wool samples, primarily from Montana, according to Hatfield. The only other wool labs in the country are a commercial lab in Denver and a lab similar to MSU’s at Texas A&M University in San Angelo, he said.

According to Ragen, who earned her bachelor’s and master’s degrees in animal science from MSU, the Wool Lab can offer its services at affordable prices because it is part of the university.

The Wool Lab also partners with MSU Extension to operate “wool pools” in which ranchers combine their product to get better prices in a competitive market. Ragen will travel throughout the state — including to Plentywood, Wibaux, Malta, Chouteau and Missoula — to analyze fleeces and sort them into different grades of quality, which further helps the participating wool growers sell their product. Last year, 89 wool growers participated in the eastern Montana pool to sell 98,000 pounds of wool for $180,500 — about 5 percent of the state’s total wool crop.

Ragen has all that ahead of her — and more — this season. But she wouldn’t mind if even more wool samples piled up.

“We’d like to get the message out that we’re here to help,” she said.