Van Coller, an associate professor in MSU’s School of Film and Photography, won the award for a project that he calls “Naturalists of the Long Now” in which he collaborates with scientists – many from MSU – on photographs that meld environmental science and art.  Many of the images are hand-annotated on their surface by the scientists working on the research projects that document environmental change over the passage of time.

Van Coller is one of 173 American and Canadian artists, scholars and scientists to be named a 2018 Guggenheim Fellow. The award honors “prior achievement and exceptional achievement,” according to the Guggenheim Foundation. This year’s winners were selected from more than 3,000 applicants.

“In photography, it’s the pinnacle award of a career,” said van Coller, who said he and his wife celebrated by dancing around their kitchen with happiness when they learned of the award. “There’s no higher honor.”

Royce Smith, dean of the College of Arts and Architecture, said that the Guggenheim Fellowship is the “Mount Everest of artistic accomplishment.”

“I think it’s (van Coller’s) poignant sensitivity to the world and his ability to translate science and humanity into the photographic image that makes him an artist of the first order,” said Smith, who added that the award is proof that the MSU photography program and its professors are second to none. “His photography powerfully documents the confluence of reason and emotion, aesthetics and climate change, aloofness and activism.”

Van Coller said that the $55,000 cash prize that accompanies the award will enable him to travel the world to work on a series of photographs documenting the science of deep time and paleoclimatology.

He said the project has roots in his living, working and recreating in Montana. The beginning of the project was inspired by hikes with friends in 2012 to some of Glacier National Park’s most remote glaciers. The friends — Todd Anderson, a printmaking professor at Clemson University, and Bruce Crownover, a master printer at Tandem Press at the University of Wisconsin-Madison — collaborated on the oversized art book “The Last Glacier,” which was on display at the Metropolitan Museum of Art in New York City earlier this year. Van Coller is also at work on five more solo, large-format books documenting melting glaciers, including the recent “Kilimanjaro: The Last Glacier.”

Van Coller said the focus of his work is to combine science and art in a contemporary take on the works of Victorian-era naturalists who were often “really artists as well as scientists.”

“In our era, however, science has become so specialized. I hope to bring a greater awareness of science through art,” he said.

In recent years van Coller’s work has included images of the research of several MSU naturalists – both faculty and students.  The photographs he submitted for the Guggenheim award documented the MSU research of Jordan Allen, a master’s student in geology; Jenny McCarty, a master’s student in ecology; James Benes, a master’s graduate in geography; Pamela Santibáñez Ávila, a former doctoral student who worked with MSU ecologist John Priscu in Antarctica; Ivy Merriot, whose doctoral research focused on the astronomical and calendrical properties of the Bighorn Medicine Wheel, and Craig Lee, a member of MSU’s archeology faculty who researches the archaeoecology of alpine ice in the Greater Yellowstone region. Van Coller said he will continue to seek MSU scientists to partner with on his interdisciplinary projects. 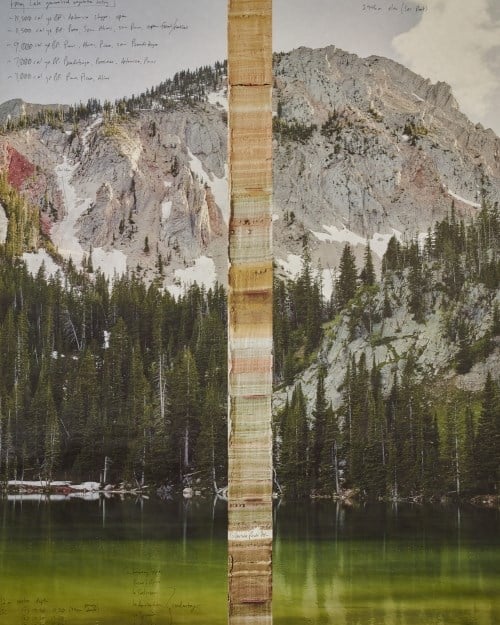 Between May 2019 and 2020, van Coller plans to visit Greenland, Baffin Island, Svalbard Island (Norway), Chile, Tasmania, Easter Island, the Brazilian rainforest and several spots in the Rocky Mountains, among other locations. He also would like to travel to Antarctica to document climate research.

In the shorter term, van Coller will travel to New York City in May to be inducted with this year’s Guggenheim class.

“Amongst my friends and colleagues, it is the ultimate,” he said.

Ian van Coller’s photo of Fairy Lake (left) near Bozeman annotated to represent the research of James Benes, who graduated from MSU with a master’s degree in geography. The photo, submitted in van Coller’s successful application for a Guggenheim Fellowship, is one of many collaborations with MSU naturalists that meld art and science. Photo by Ian van Coller, used with permission.