Arizona teachers walk out of their poorly equipped classrooms

Phoenix, Arizona (CNN) When Elisabeth Milich posted her pay stub on Facebook, she was completely unprepared for the viral stir.

A few mean people insulted her makeup. Others accused her of whining. After all — she chose a career in education and gets summers off. What did she expect?

But when most saw black-and-white proof that a veteran teacher in an affluent Phoenix school district takes home $320 a week, they flooded her page with messages of outrage and moral support. 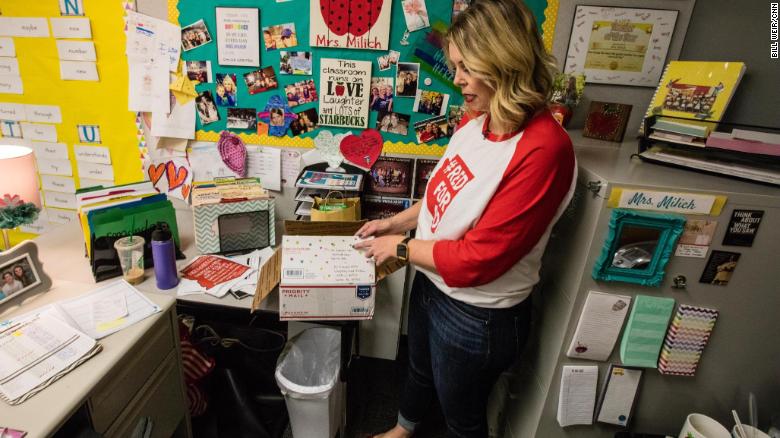 Teacher Elisabeth Milich has had supplies and funds sent from New York and London.

When they learned that she uses part of that meager wage to buy snacks for her kids, rugs and chairs for her classroom, strangers in New York sent a box of Scotch tape and pencil erasers and a sixth grader in London shipped her a $150 gift card.

"Dear Mrs. Milich," read the card. "With the most important job in the world you shouldn’t have to use your own funds for school supplies."

"I mean, my eyes just welled up with tears," the second grade teacher at Whispering Wind Academy says, pressing hand to heart. "I don’t understand how out of touch our legislators can be. I don’t understand the people who think we’re greedy."

On Thursday, Milich and some 50,000 or so fellow educators will stage the first teacher walkout in Arizona history, despite promises from Republican Governor Doug Ducey to bump their pay20% by 2021. 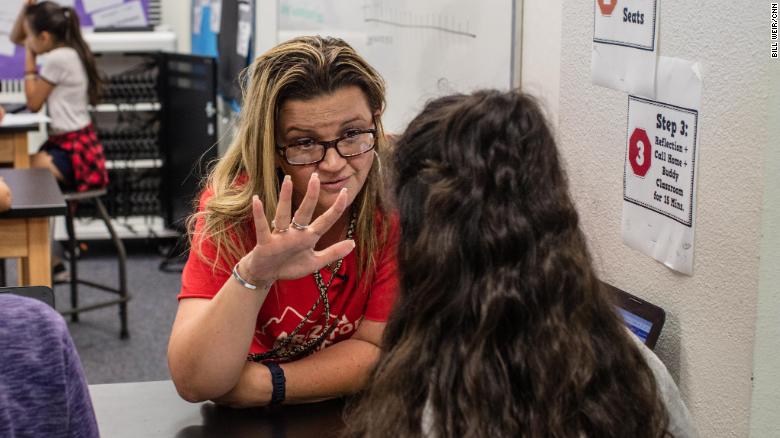 That’s what he says," Cindi Morton says as she rolls her eyes toward the ceiling of Herrera Elementary School in Phoenix. "But I’m proud to say I’ve been teaching in Arizona schools for 10 years. I’m one of those people who has to see it before I can believe it."

She points out that in a longtime red state where many Republican lawmakers have taken pledges never to raise taxes, Ducey’s election-year promise is full of fuzzy math and has no real legislative support.

"Why would you not want to provide our kids with the best possible education?" she says. "We do our best here. I need my leaders, my government to do the same. I need them to bring it every day every single day because I sure do."

In addition to teaching fifth and sixth grade science, Morton is a private tutor, a caretaker for emotionally challenged kids and, four nights a week, she turns her car into a taxi and drives for Lyft. She says it is the only way she can survive in a state that ranks 44th in the nation in teacher pay and 48th in per-pupil spending, according to the National Education Association.

Since the "Red for Ed" movement started in Arizona, teachers have filled social media with pictures of of vermin-filled classrooms and tattered textbooks, improvised air conditioners and globes showing a Soviet Union and two Germanys.

Similar frustrations sparked teacher walkouts in West Virginia and Oklahoma and the red-state revolts are now spreading to Colorado and North Carolina.

In Kentucky, a one-day walkout brought stiff resistance from lawmakers and accusations from Governor Matt Bevin that teachers were being "thuggish."

"I guarantee you somewhere in Kentucky today a child was sexually assaulted that was left at home because there was nobody there to watch them," he said on April 13, drawing a sharp rebuke from from his Republican-led legislature. Bevin apologized for the remark. 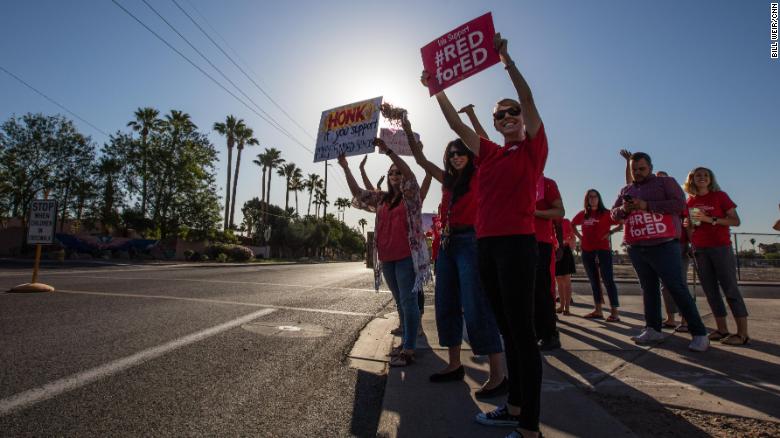 But while there have been no such guilt trips in Arizona, the State Superintendent of Public Instruction issued a stark warning. "A walkout is a nice term for it but it is a strike, plain and simple," said Diane Douglas on Monday, suggesting that by breaking state law, teachers could be censured or lose their teaching certificate.

But since so many teachers have left the state — or the profession — there are thousands of unfilled vacancies and many like Jay Barbuto consider the warning a bluff.

"You can try to intimidate me as much as you want," the eighth grade teacher at Edison Elementary in Phoenix says. "I’m marching to the Capitol and I’m not doing it for myself. I’m doing it for 125 kids that walk in my room every day. I am going to the Capitol because I’m tired of my kids not getting a fair shake.

"I’m not scared. I get scared of a lot of things. I get scared to fly, but people who try to shoot us down like that? It doesn’t scare me."