The crash test focused on front-end crashes where SUVs were going 40 mph. The Insurance Institute estimates 25 percent of serious injuries and fatalities from frontal crashes are the result of these types of accidents, reports CBS News correspondent Kris Van Cleave.

The 2018 Ford Explorer rated poor because its structure collapsed – intruding as much as 15 inches into the SUV – resulting in a high likelihood of injuries to the front passenger’s right hip and left lower leg. Ford insisted the Explorer is safe, saying: "We continually make improvements to our vehicles to help our customers stay safe on the road."

"We were observing that some of the countermeasures or the design changes that automakers were making on the driver’s side weren’t necessarily making it to the right side of the vehicle," said David Zuby, the IIHS chief research officer.

In the test, the passenger crash dummy’s head in the 2018 Jeep Grand Cherokee hits the dashboard through the airbag. The side airbag does not deploy and the door opens allowing the dummy’s head to go outside the SUV.

The poor performance resulted in possible head injuries. The vehicle’s safety cage intruded into the cabin by up to 10 inches. Fiat-Chrysler, which makes the Jeep, said all its vehicles "meet or exceed federal safety standards" and "are engineered to address real-world driving situations. No single test measures overall vehicle safety."

"My advice to people who are shopping for new vehicles is that they’ve got better choices," Zuby said.

The 2019 Kia Sorento scored "good" after it was redesigned to better protect front passengers. It is the only SUV of the eight tested to earn the IIHS’ highest overall rating: top safety pick plus.

Both the Jeep and the Explorer are older designs. Ford expects its all-new 2020 Explorer to perform better when it’s launched next year. IIHS said it expects Jeep to improve its performance when the Grand Cherokee is updated. 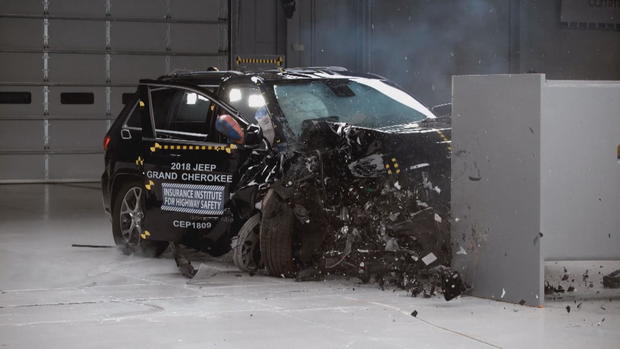