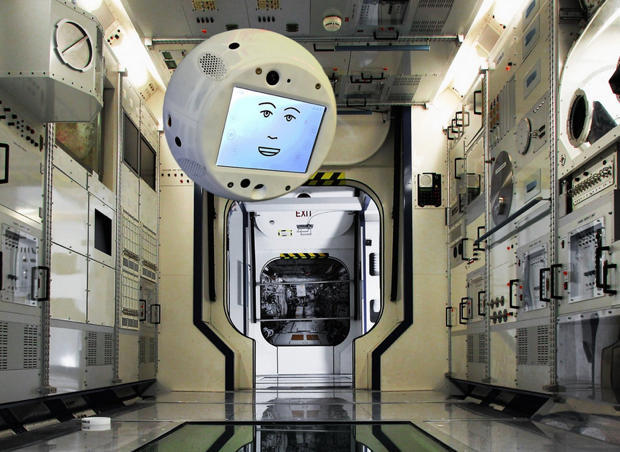 Lighting up the pre-dawn sky, a SpaceX Falcon 9 rocket streaked into orbit Friday and set off after the International Space Station carrying three tons of equipment, supplies and science gear, including a robotic "floating brain" powered by IBM’s Watson technology that will put artificial intelligence through its paces as an astronaut’s assistant.

Liftoff from pad 40 at the Cape Canaveral Air Force Station came on time at 5:42 a.m. EDT, roughly the moment Earth’s rotation carried the pad into the plane of the space station’s orbit — a requirement for rendezvous missions.

Trailing a brilliant jet of exhaust from its nine first-stage engines, the 229-foot-tall rocket climbed smoothly away to the northeast over the Atlantic Ocean, putting on a jaw-dropping show as the plume expanded in the low-pressure upper atmosphere, catching the light of the rising sun in a dramatic spectacle visible across Florida’s Space Coast.

Even rocket scientists and engineers were impressed.

"We had a beautiful launch," said Jessica Jensen, manager of SpaceX’s Dragon program in Florida. "For those of you who saw it, these are my favorite, these pre-sunrise or post-sunset launches (make) for a spectacular show in the sky. It’s dark outside, but you have the sun illuminating the plume as (the rocket is climbing into) space."

She said the plume reminded her of a "space jellyfish that’s coming down after us. But yeah, these are the best."

This was SpaceX’s 12th flight so far this year and the third for NASA featuring a previously flown first stage, used to launch a NASA planet-hunting satellite in April, and a "used" Dragon cargo ship that flew to the space station in 2016.

The first stage was the last "block 4" model in SpaceX’s inventory. The block 4 version was not designed to fly more than twice and SpaceX made no attempt to recover the booster after launch, letting it crash into the ocean instead. 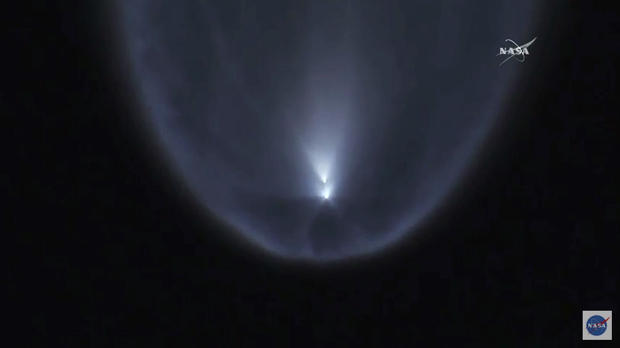 A close up of the Falcon 9 as seen through a long-range tracking camera, moments after the first stage, upper center, separated from the booster’s upper stage. (NASA/SPACEX)

But after this flight, SpaceX will switch to upgraded block 5s that are designed for 50 or more flights each with minimal refurbishment between launches.

"From the get-go, SpaceX has set out to make spaceflight more like commercial air travel," Jensen said Thursday. "We want to make it safe, affordable and utilizing vehicles that can be reflown repeatedly.

"This is the key to the future of a civilization where we have thousands to millions of people exploring the stars and living out on other planets. Tomorrow’s mission (is) one small step toward that goal."

The climb to space went smoothly and the Dragon capsule was released to fly on its own nine-and-a-half minutes after launch. If all goes well, the cargo ship will reach the International Space Station early Monday, bringing more than 3,770 pounds of equipment and supplies to the lab in its pressurized cabin.

A grapple fixture, or "hand," for the station’s robot arm is loaded in the Dragon’s unpressurized trunk section, along with a sophisticated NASA radiometer that will study how vegetation responds to high temperatures, drought and other forms of stress. Both components, totaling 2,170 pounds, will be mounted on the station’s exterior later.

Also on board: Texas blueberries, ice cream bars and super-caffeinated coffee for the crew.

"We like to keep our astronauts super caffeinated because they work harder then," space station manager Kirk Shireman joked. "I actually tried some of the coffee the other day. … I enjoyed it, I’ll just say that (but) I’m not endorsing any product!"

Among the experiments being delivered to the station’s interior is CIMON (pronounced Simon), a spherical robot about the size of a basketball. CIMON stands for "Crew Interactive Mobile CompanioN."

The robot features a TV monitor with an animated cartoon-like face, multiple built-in microphones, speakers and video cameras and a propulsion system to autonomously move around inside the European Space Agency’s Columbus module.

Developed by Airbus and IBM for the German space agency, CIMON can recognize faces, multiple voices and accents and has been programmed with a personality of sorts. "He" can even tell jokes when the mood strikes, using the same voice familiar from Watson’s stint on the Jeopardy game show.

"That’s actually our overall mission, to create a crew companion, a real crewmate to the astronauts," said Matthias Biniok, lead IBM Watson architect for Germany, Austria and Switzerland and the project lead for CIMON. "That’s why we created a personality for CIMON."

What sort of personality?

"My personality expert always says CIMON is a typical German," Biniok said in an interview with CBS News. "So he is like very, very straight forward when it’s about work, when it’s about procedures and experiments, and as soon as it gets a little bit chattier, small talk like, then he gets also funny, tells some jokes, tries to be a good companion."

Asked how he personally relates to CIMON, Biniok, 26, said he views the robot "a little bit like a son. Sometimes, he’s really (hard) working and sometimes he’s really mean and doesn’t do the things I want him to do!"

In that case, CIMON gets a lecture in the form of revised instructions. As for what kind of jokes CIMON might tell, Biniok said most were provided by a student and "some of them are pretty harsh. But yeah, I think that should be a surprise for the astronauts."

The idea for CIMON came from an Airbus engineer who happened across an old cartoon called "Captain Future." Biniok said the show featured a robot called Professor Simon, "actually a flying brain and it looks quite similar to CIMON here."

But the actual brain power for the initial CIMON demonstration exists in the IBM cloud back on Earth. CIMON will relay questions or comments from Gerst to the Watson AI via the station’s satellite internet link and then relay the answer to Gerst. Biniok said the delay between question and answer is about two seconds.

Future versions of CIMON will include on-board AI to eliminate, or at least minimize, the need for direct contact with Earth, making such advanced units ideal for long-duration flights.

"That’s our vision," Biniok said. "We want to support astronauts, especially on long-term flights to moon, Mars and beyond. … That will be one of the next steps, move the AI components from Earth to the International Space Station or to another spaceship, especially when we are going to the moon or Mars."

Closer to home, he said the technology also is being used by more than 20 industries in more than 45 countries "because it’s all based on IBM Watson, based on the IBM cloud, and it’s available for all companies that want to use AI in their businesses. We’re already using it in health care, in automotive, in banking, all over the world."

For its first space flight, CIMON will attempt a few relatively straight forward tasks, assisting German astronaut Alexander Gerst as he works through procedures for an experiment, helping him solve a Rubik’s Cube and a few others.

Equipped with microphones that can tell where Gerst is when he speaks, CIMON will turn to face the astronaut and fly over to his location to assist with a given task. It will even bob up and down as if nodding its head in agreement or rotate side to side to indicate a negative response.

The idea is for the Watson AI, loaded with flight procedures, experiment and maintenance details, to eventually serve as a smart assistant for astronauts, learning on the job and providing quick answers to complex questions.

"Imagine you are an astronaut on the ISS and you have to conduct a sophisticated experiment," Biniok said. "Right now, you have to float to a laptop and look up a pdf procedure, maybe you have to search this pdf document for a specific step, then you have to float back, maybe put on gloves again and continue working on your experiment."

Such routine operations take time, he said. But with CIMON, "You can just ask those questions and let him guide you through the whole experiment."

"I think that’s what CIMON is good for, he can increase the efficiency of the astronauts and therefore, decrease the time-consuming factors by just letting the voice speak," Biniok said. "He can just ask CIMON, ‘what’s the next step? What should I do now? What kind of tool do I need to use right now?’"

The first space-based tests are expected in a few weeks.