For the second month in a row, Time magazine has put a provocative photo illustration of President Donald Trump on its cover — this time, morphing him into Russian President Vladimir Putin.

The photo illustration, by visual artist Nancy Burson, "is meant to represent this particular moment in US foreign policy, following the pair’s recent meeting in Helsinki, Finland," Time said in a statement.

Trump has weathered heavy criticism from Democrats and Republicans alike for his performance at the meeting, where he publicly sided with Putin over US intelligence agencies’ assessment that the Russians interfered in the 2016 presidential election. Since coming back home from Finland, the President has changed his messaging and now says he holds Putin personally responsible for the election meddling and believes the assessment of government intelligence agencies.

TIME’s new cover: Trump wanted a summit with Putin. He got way more than he bargained for https://t.co/sUu9gGKmmP pic.twitter.com/qq6iOjlis1

In addition to the still image for the July 30 issue, Burson created a video image as well, which morphs back and forth between the seemingly-ever changing appearances of the two men.

Just last month, Time used the President in another striking image on its cover, when the Trump administration’s policy that separated families crossing the US border was dominating the headlines.

In that stark photo illustration, the towering figure of Trump looms over a sobbing child, who is the subject of a now-iconic photograph taken by Pulitzer Prize-winning photographer John Moore. 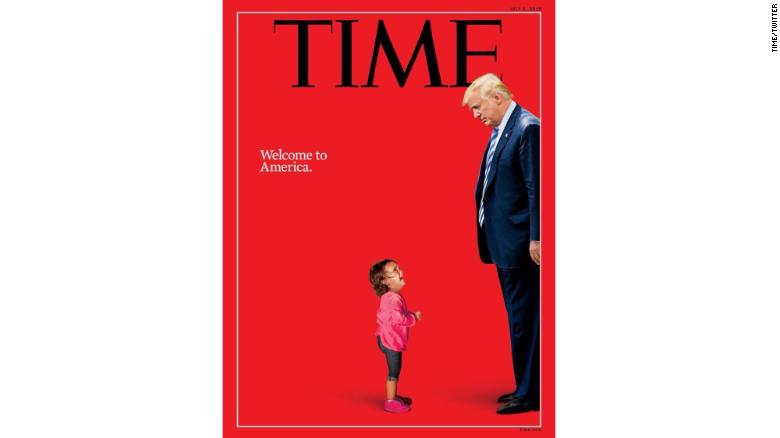 "Welcome to America," the illustration reads.

Use of the photo of the child generated controversy as well, after it was revealed that the 2-year-old Honduran girl had not been separated from her mother at the border.

The latest image was created by a photography pioneer

Burson, the designer of the latest cover, is a trailblazer in this type of art, starting with her work 30 years ago with scientists at MIT which led to the development of computer-generated compositing technology.

She’s best known for developing a photographic face-aging technique that the FBI uses to find missing children, according to the Time statement. Her most famous aged image is the one of kidnapped 6-year-old Etan Patz that was on the front page of the New York Post in 1985. It showed what Patz might have looked like six years after his kidnapping.

Burson told Time her goal with the Trump-Putin image was to make people "stop and think" about the similarities between the two leaders.

"What my work has always been about is allowing people to see differently," she said. "The combining of faces is a different way for people to see what they couldn’t see before."