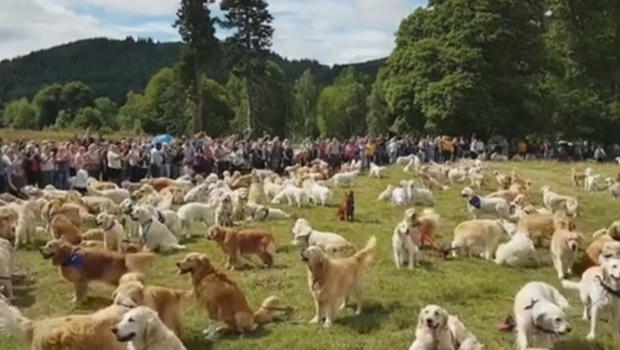 It happened this past week, a historic conclave of canines in Scotland.

No fewer than 361 golden retrievers gathered on the estate of the 19th century aristocrat Lord Tweedmouth to celebrate the breed’s 150th anniversary.

His Lordship, the story goes, was in need of a hunting dog who could master both the rugged, rocky terrain and the soggy, boggy marshes of the Scottish Highlands.

To that end he crossed a wavy-coated retriever with a tweed-water spaniel to create the forerunner of the golden retriever – equally at home on both land and water.

Today, of course, the golden retriever is beloved on both sides of the Atlantic. In fact, it’s now the third most popular breed in the United States, behind Labrador retrievers and the German shepherd.

Has going to the dogs EVER been this much fun?