A child’s bucket of sand is one sure sign of summer. But to REALLY experience sand, you have to "let it slide." CBS’ Barry Petersen leads the way:

At first glance you might think these sand dunes belong to a desert, or an ocean beach, but neither is the case. These dunes are part of Colorado’s Great Sand Dunes National Park and Preserve, dropped right in the middle of miles of lush farmland. It’s an unusual slice of nature, but more than that, it’s home to an unusual sport: Sandboarding, using the sand like snowboarders slide down snow.

Petersen said, "I know the answer to why people climb mountains, but why do people slide down hills?" 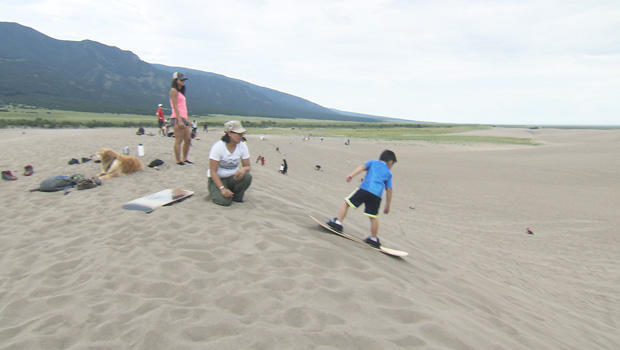 "Because it’s fun. I mean, it’s exhilarating!" said Raleigh Burt, who helps run a shop that rents sandboards. "You can go snowboard or ski all winter long, but in the summer what’s your opportunity? This is something that we enjoy doing."

Burt says the dunes handle the more than 300,000 visitors a year just fine. Does he fear that the visitors will ruin the sand dunes?

"No, you really don’t," Burt replied. "I mean, the footprints that we’re putting into the sand right now, give it a couple of rainstorms and some wind, and they’re gonna be gone. The sand dunes are always morphing and changing."

In prehistoric times this valley was a lake that dried up, and Park Ranger Kathy Faz said all it took was roughly 440 million more years to make this: 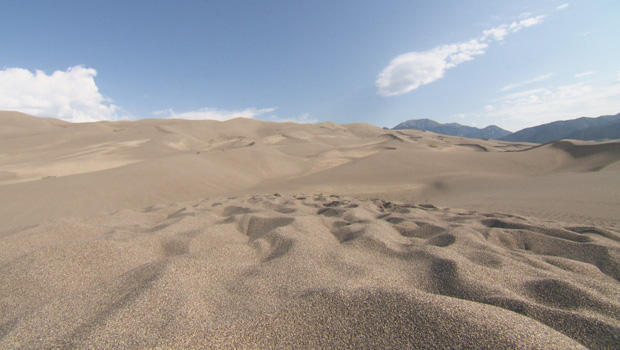 "With that comes winds and different atmospheric conditions that have allowed the sand to continue to push its way towards this beautiful mountain range called the Sangre de Cristo mountains," said Ranger Faz.

"So, the sand was there and the wind kind of pushed it here?" asked Petersen.

"Correct. And sand particles are eroded rock materials. So, you’ll find that these sand particles have traveled from the San Juan mountain range 70 miles to 80 miles away from here."

All of those tiny particles create one huge sandbox that sandboarding enthusiast Kelsey Horton confessed brings out the kid in you.

Petersen asked, "Don’t you ever yell Wheeeee! when you’re coming down?" 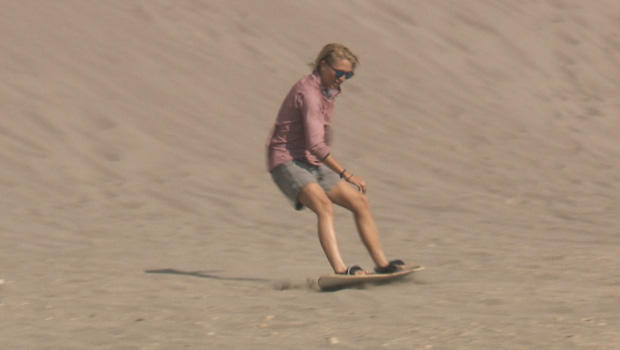 There other place to sandboard, from America’s Great Lakes to the great rides of New Zealand.

But these dunes, in the heart of Colorado, are the tallest in North America – sand piled as much as 750 feet high. 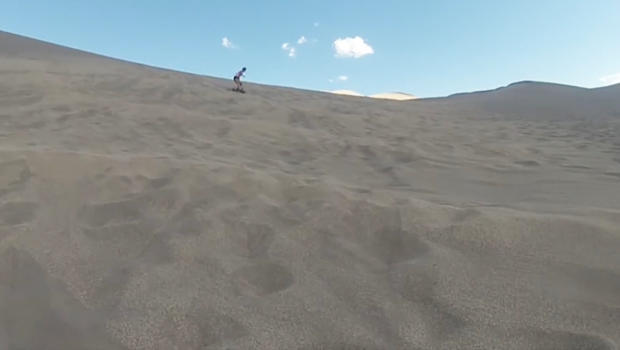 And something else: forget spending big bucks like on ski slopes. "It’s not like skiing or snowboarding, where, you know, take two days’ worth of lessons and then buy another lift ticket and you might start having fun," said Burt. "Just grab one of these, go out, and you’re gonna have a blast!"

Fair warning, there’s a lot of eating sand to get the hang of this, and even the best take an occasional dive.

Does it hurt? "Yeah, a little bit, but it’s not bad,’ Burt replied. "The sand’s pretty forgiving."

"What hurts more, the body or the pride?"

"The pride!" he laughed.

But as everyone soon discovers, it’s like learning to ride a bicycle.  Sure, there’s a fall or two, but once you get the hang of it, all you want to do … is do it again.