A quick look at wildfires in southwest Montana: 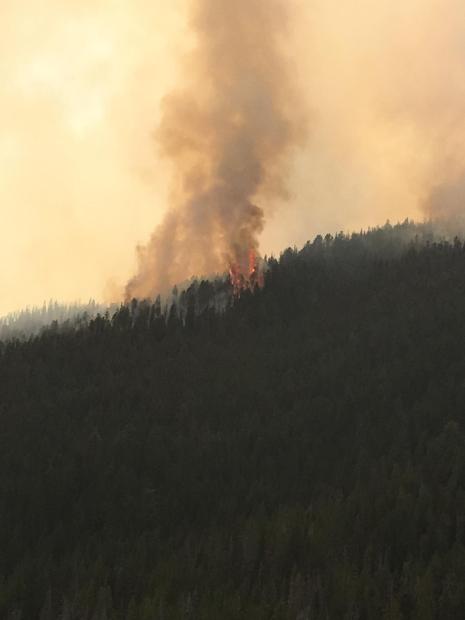 On Saturday, hot and dry weather caused the Bacon Rind Fire to increase its behavior again. The blaze continued to move through the vegetation as it finds an opportunity to torch into groups of trees. With this fire behavior more smoke was seen in various spots above the fire perimeter. Travelers along highway 191 should use caution due to the chances of smoke settling along the roadway this evening.

The lightning-caused fire has been burning since July 20.

Monument Fire – Burning in the head of Ruby Creek, about 18 miles southwest of Cameron in the Gravelly Mountains.

The lightning-caused Monument Fire detected on August 6, 2018, at approximately 8  p.m. currently estimated at ¾ acre and is in the head of Ruby Creek, roughly 18 miles SW of Cameron in the Gravelly Mountains. Resources from the Madison RD and DNRC responded the following morning. The fire is burning in whitebark pine and sub-alpine fir, with approximately 70% mortality, at an elevation of 9,000 feet. The combination of 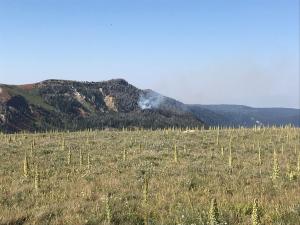 numerous snags (dead standing trees), inability to provide a timely medical response in case of injury to firefighters, and currently few values at risk means the fire will be placed in monitor status. Fire personnel will be checking the fire daily and begin fuel reduction work on the Lazyman Radio Repeater. Above average temperatures, low relative humidity, and higher winds are reportedly the challenges over the weekend. As a result, smoke will be visible in the Black Butte/Monument ridge area on the Gravelly Range road, as well as along US Hwy 287 along the Cameron Bench.

The lightning-caused Virginia Creek fire detected on August 2 at approximately 12:45 p.m. is currently 67 acres in size and is burning in heavy concentrations of mixed conifer (sub-alpine fir, Engleman Spruce, lodgepole pine) fuels with very heavy concentrations of standing dead trees and logs on the ground and is 30% contained.

Resources from the Beaverhead-Deerlodge National Forest, MT DNRC, and the Madison Valley Volunteer Fire Department working on this fire are: 30 personnel including 2 Engines; 1 Water Tenders; and one 20 person hand crew, The fire is located approximately five miles west of McAllister, in the Virginia Creek drainage.

Virginia Creek Road #1249 and trail #6314 is closed in order to provide for the safety of firefighting personnel and the public. Smoke may still be visible from Norris Hill south to Ennis for the next few days to come.