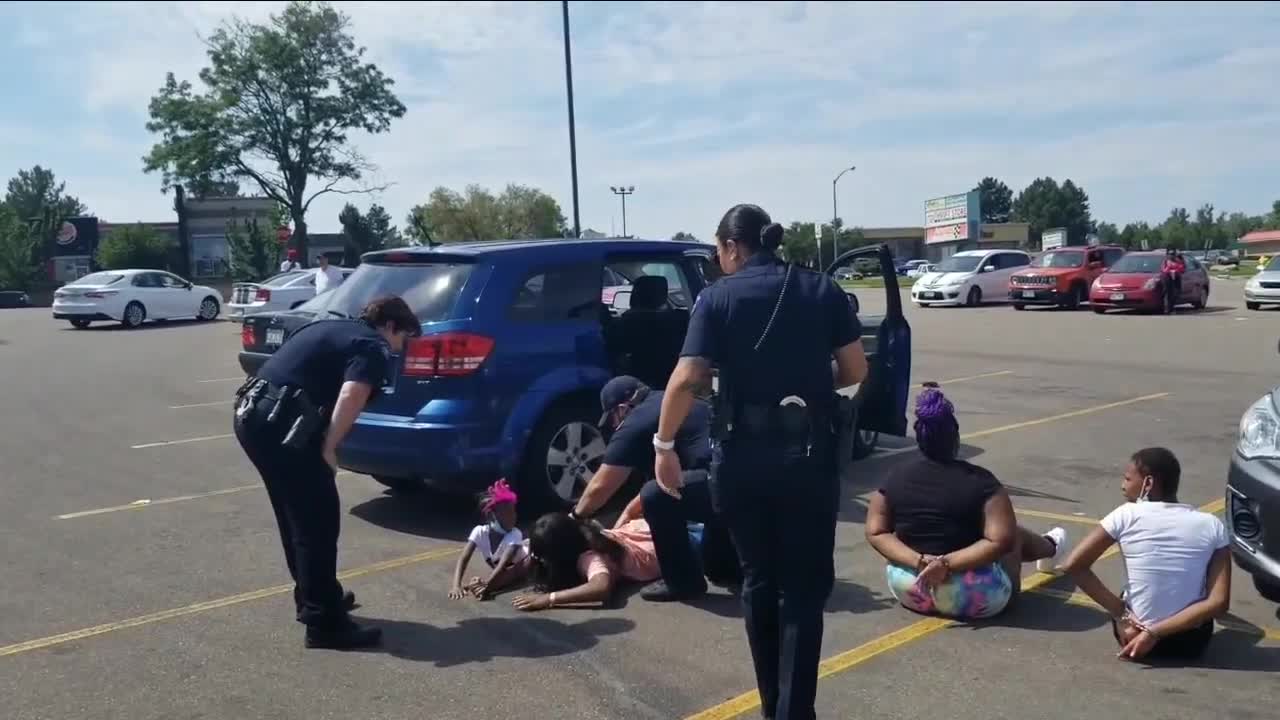 Police detained and handcuffed a black mother and four children after mistaking their SUV for a stolen motorcycle from another state. 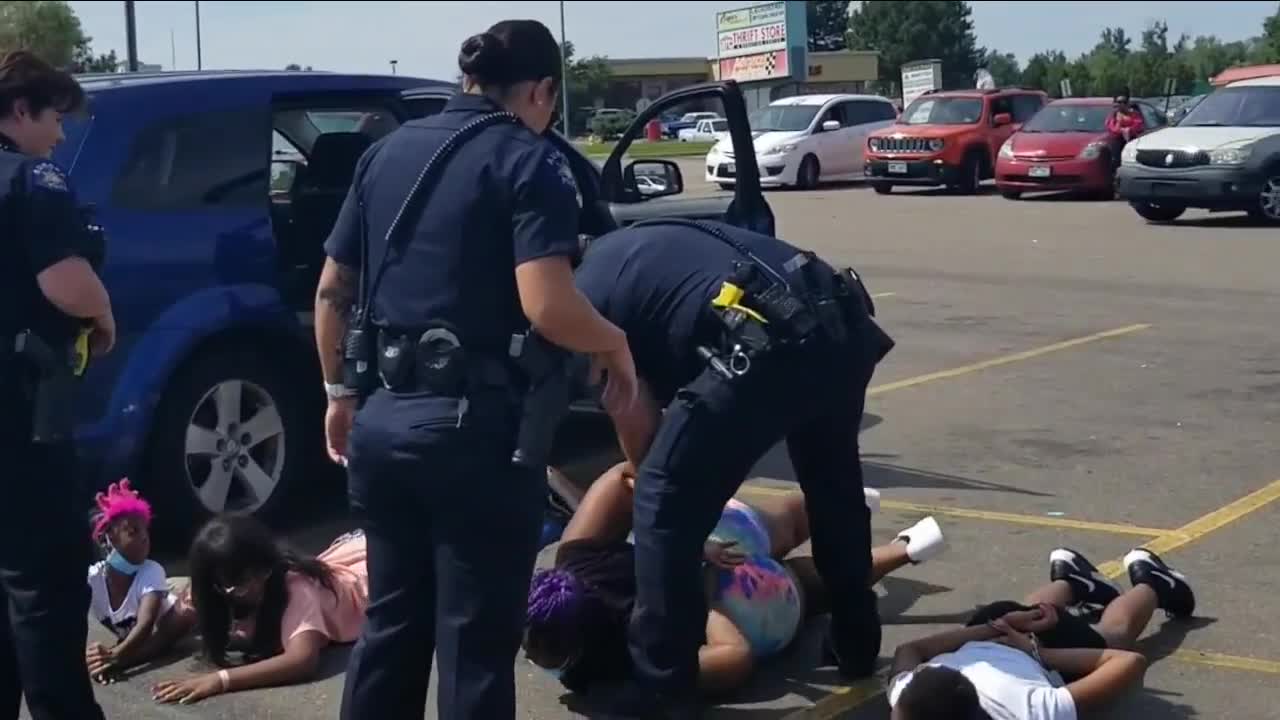 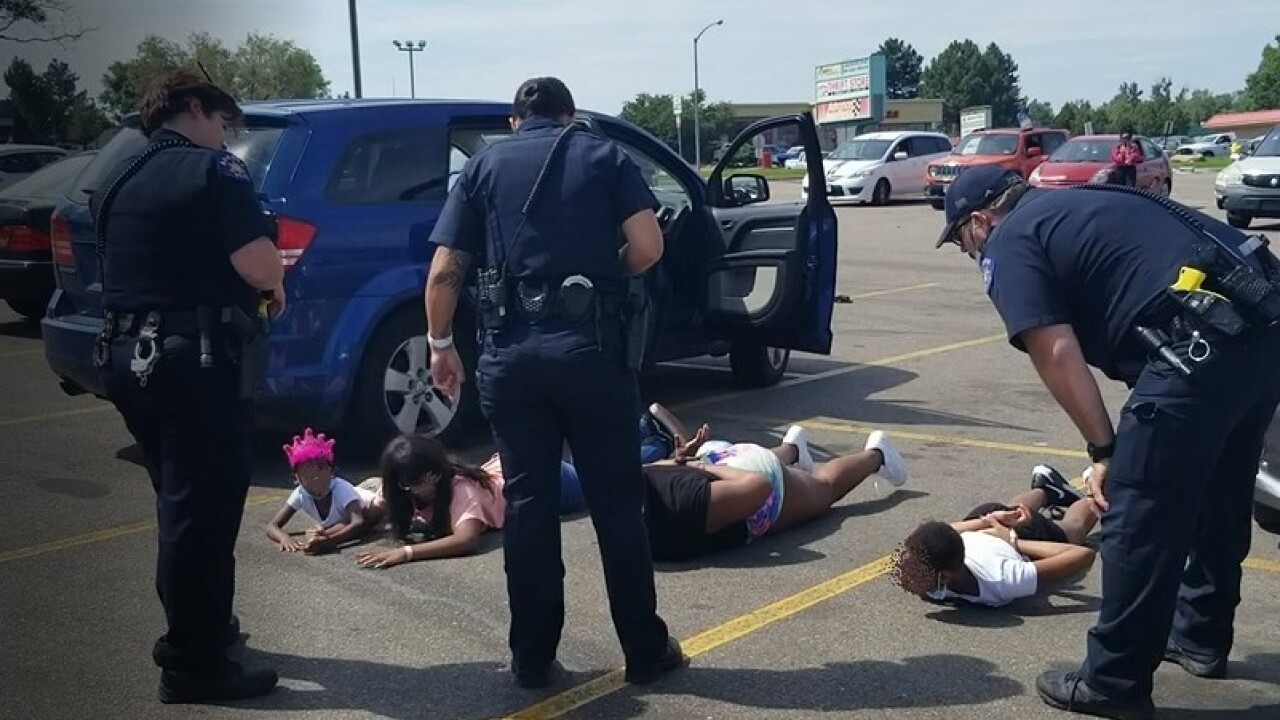 AURORA, Colo. — Police detained and handcuffed a Black mother and four children after mistaking their SUV for a stolen motorcycle from another state.

It happened in the parking lot of a shopping center off of Buckley Road and East Iliff Ave. Sunday morning.

"Why are you now placing these children on the ground face into the concrete? It's hot! In front of all of us? Screaming at them. They are telling you they are hurt," witness Jenni Wurtz said.

Wurtz recorded the incident along with several other witnesses.

She says a police car slowly pulled behind the family. The officer drew their weapon on the family and ordered them out of the car. Several of the children were handcuffed.

"That makes me very mad because I am not anti-police. I'm anti- what happened yesterday, and that was ridiculous," Wurtz said.

The car the family was driving was not stolen. Police used a license plate scanner to gather information on vehicles in the area. They should have been looking for a motorcycle with the same plate from another state.

Interim Aurora Police Chief Vanessa Wilson blamed the license plate reader, but could not explain why the dozens of officers who responded did not confirm the vehicle description.

"I totally understand that anger, and don't want to diminish that anger, but I will say it wasn't a profiling incident. It was a hit that came through the system, and they have a picture of the vehicle the officers saw," Wilson said, defending her officers' actions.

After officers realized the mistake, the family was uncuffed, but more officers continued to arrive. Video shows more than a dozen officers standing around the traumatized family.

"I do not think a stolen vehicle is worth traumatizing the lives of children. On top of that, I was 20-feet away with a drawn gun. They didn't even tell me to move, secure the scene. They didn't do anything," Wurtz said.

Wurtz filed a complaint with internal affairs. She believes the police department's policy needs to change.

By Monday evening, an internal investigation was underway following the incident, according to Wilson. She released the following statement on Monday.

"We first want to offer our apologies to the family involved in the traumatic incident involving a police stop of their vehicle yesterday. We have been training our officers that when they contact a suspected stolen car, they should do what is called a high-risk stop. This involves drawing their weapons and ordering all occupants to exit the car and lie prone on the ground. But we must allow our officers to have discretion and to deviate from this process when different scenarios present themselves. I have already directed my team to look at new practices and training. I have called the family to apologize and to offer any help we can provide, especially for the children who may have been traumatized by yesterday's events. I have reached out to our victim advocates so we can offer age-appropriate therapy that the city will cover."

Sunday's incident comes as the Aurora Police Department faces continued criticism over its handling of the death of Elijah McClain. McClain died in police custody in 2019, but the case has garnered nationwide attention amid widespread protests in favor of police reform.

This story was originally published by Jessica Porter on KMGH in Denver.