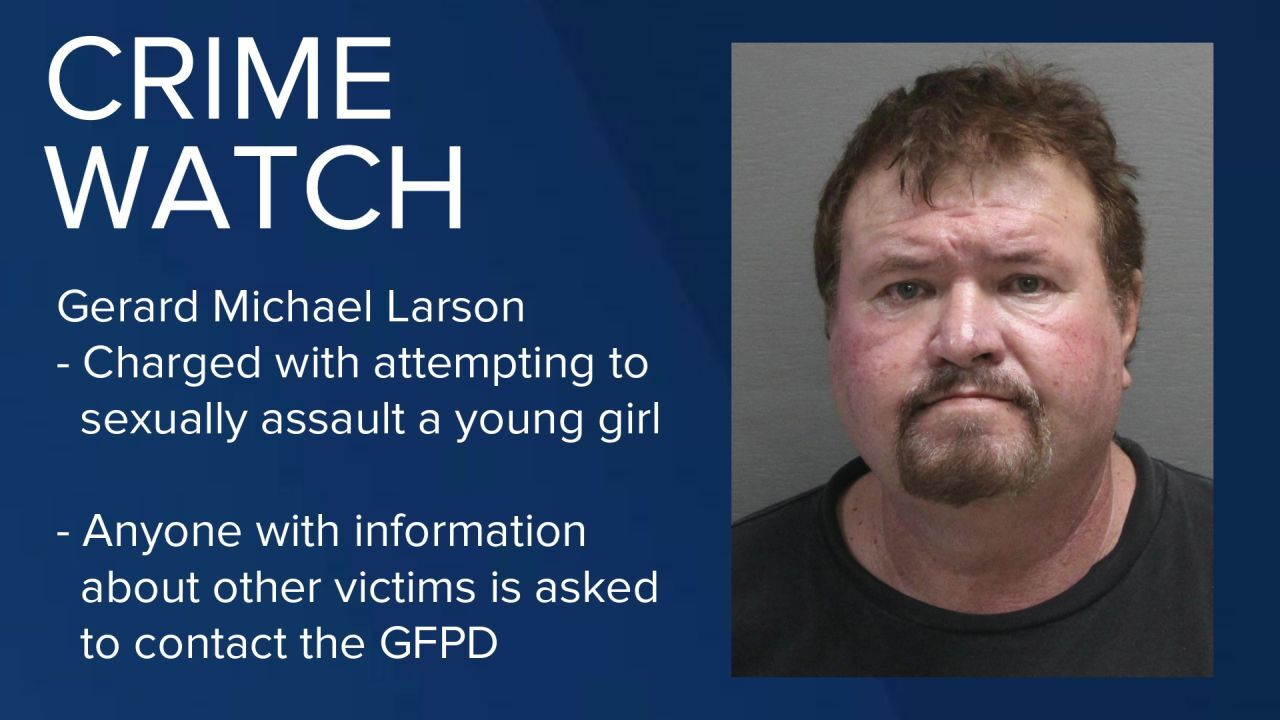 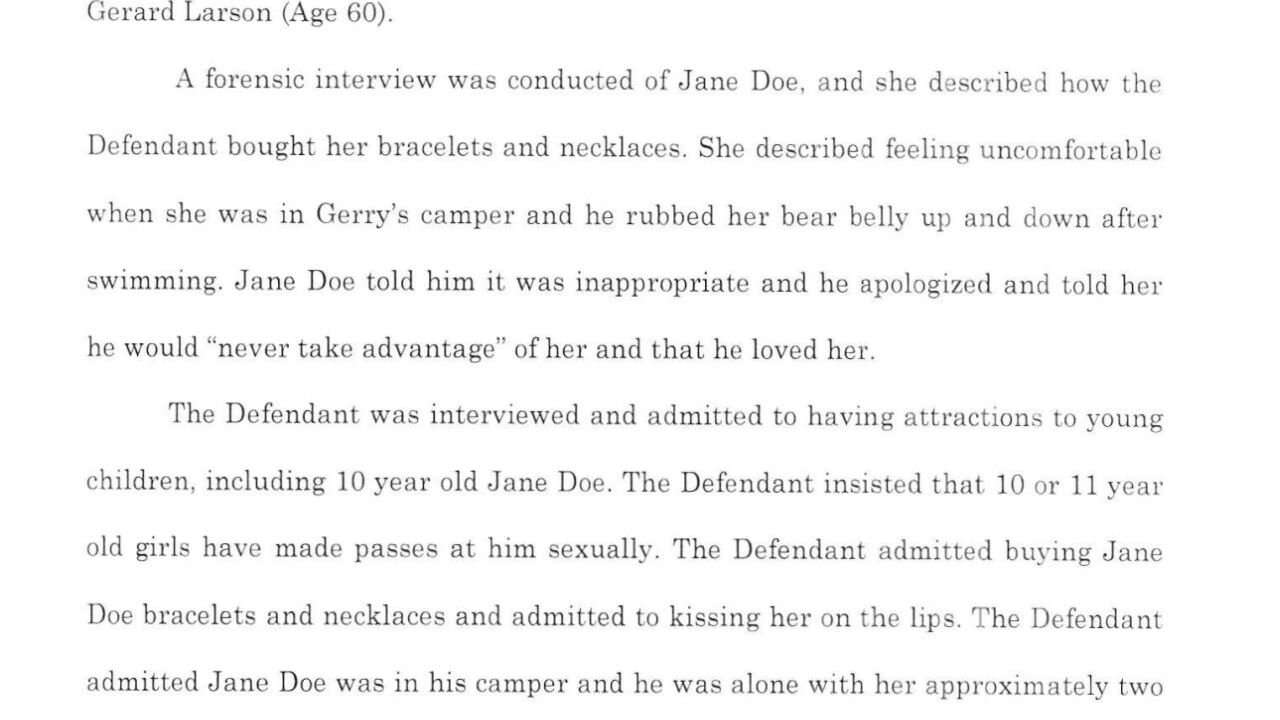 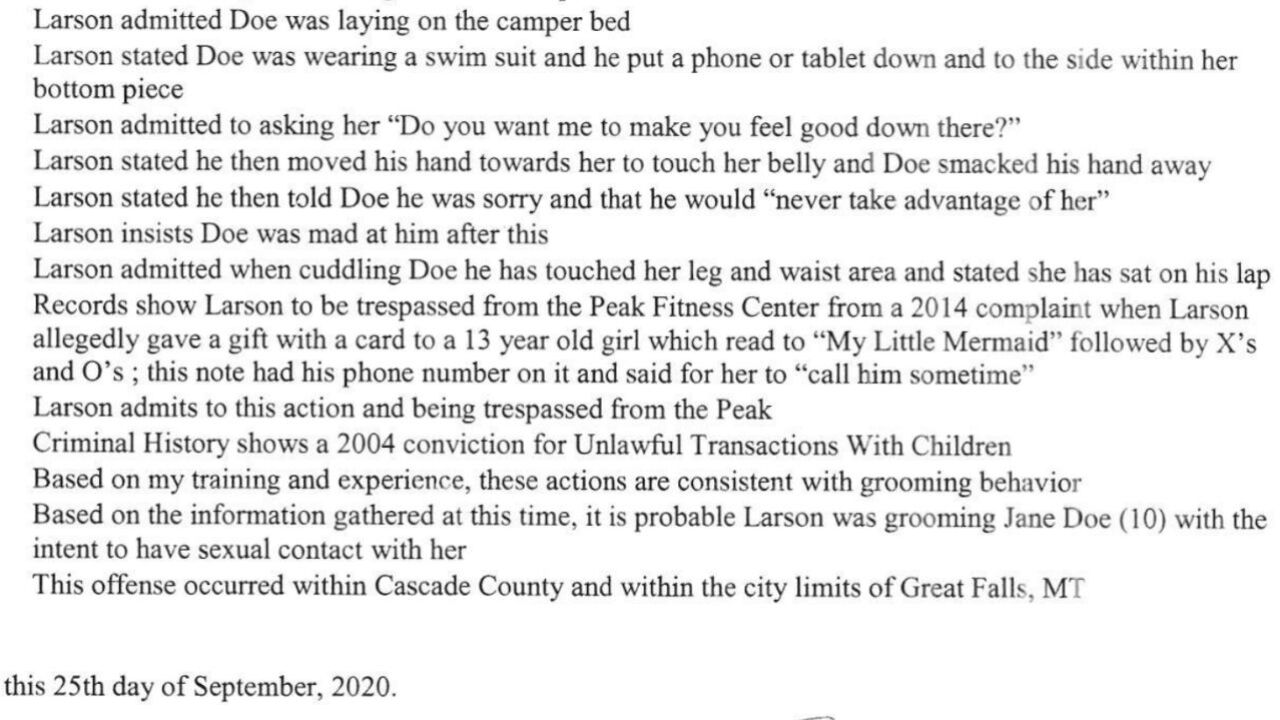 Gerard Michael Larson has been charged with attempting to sexually assault a young girl in Great Falls, and police have reason to believe that there may be other victims.

Court documents state that a person told police that a suspicious man - later identified as Larson - was watching a couple of 10-year old girls from an orange Chevy truck in the street. The person saw Larson talking to one of the girls (Jane Doe) as she leaned into the passenger side window. The person who made the report notified a parent of one of the girls, who said that Larson had given one of the children gifts and wanted the child to see his camper.

A forensic interview was conducted of the girl, and she said that Larson bought her bracelets and necklaces. She described feeling uncomfortable when she was in Larson's camper and he rubbed her belly up and down after swimming. She told him it was inappropriate and he apologized and told her he would "never take advantage" of her and that he loved her.

Larson was interviewed by police and admitted having attractions to young children, including the victim in this case. According to court documents, Larson told police that "10 or 11 year old girls have made passes at him" sexually.

He admitted buying Jane Doe bracelets and necklaces and admitted kissing her on the lips. Larson also admitted Jane Doe was in his camper and he was alone with her approximately two weeks prior. He admitted that Jane Doe was laying on the camper bed, wearing a swimsuit. He confessed to putting a phone or tablet down and to the side within her, and asked her, "Do you want me to make you feel good down there?"

Larson said that the child stated that when he moved his hands towards her to touch her belly, she smacked his hand away. He said he then apologized and told her he would never take advantage of her.

The GFPD says that records show Larson had been barred (trespassed) from the Peak Fitness Center from a 2014 complaint when he allegedly gave a gift with a card to a 13-year old girl addressed to "My Little Mermaid," followed by X's and O's; this note had his phone number on it and said for her to "call him sometime."

The investigator concluded: "Based on my training and experience, these actions are consistent with grooming behavior. Based on the information gathered at this time, it is probable Larson was grooming Jane Doe with the intent to have sexual contact with her."

The Great Falls Police Department is concerned that there may be additional victims in this case. The detective assigned to the case is Adam Price. If anyone has information pertaining to Gerard, you are asked to call the GFPD at 406-455-8516, or contact the GFPD via private message on their Facebook page.

Larson, 60 years old, has been charged at this point with sexual assault (attempt); if convicted, he would face a sentence of up to life in prison.