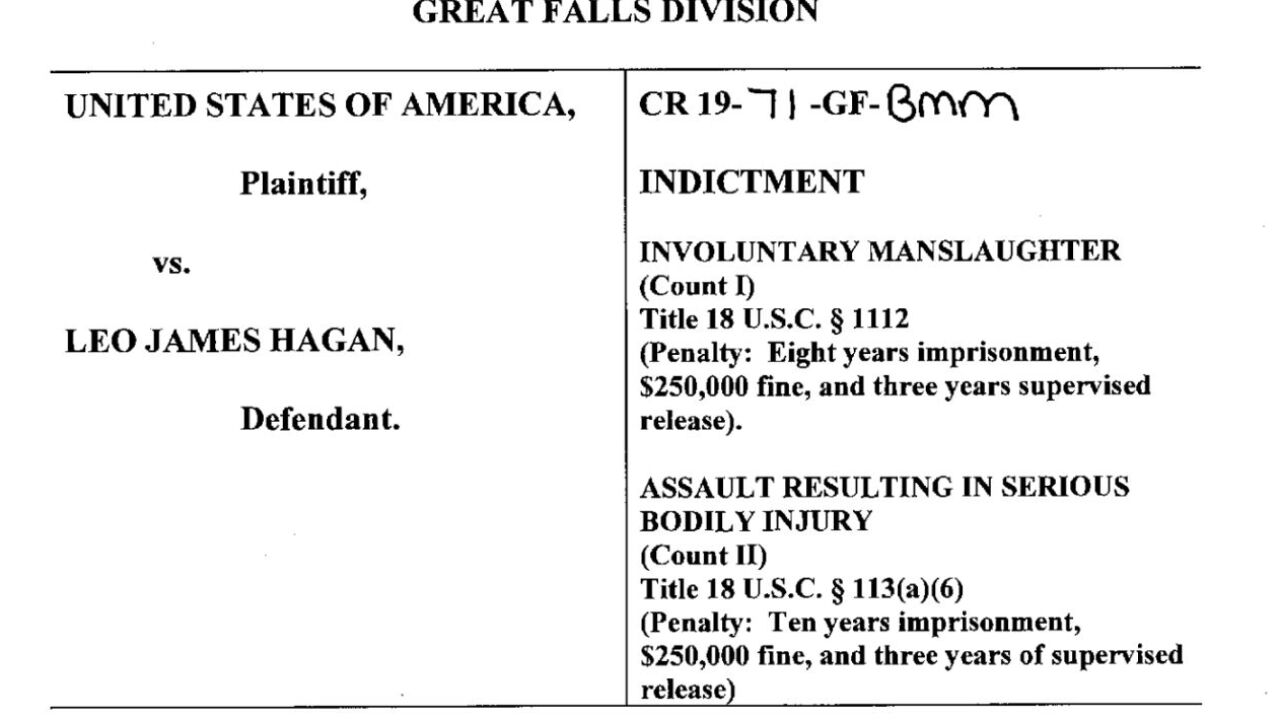 Leo James Hagan of East Glacier Park was convicted in federal court in Great Falls on Wednesday of killing one passenger and seriously injuring a second passenger after he had been drinking and driving and crashed in Glacier National Park last year.

In evidence presented at trial, the prosecution said the crash occurred on June 11, 2019, on Two Medicine Road, near Lower Two Medicine Lake, about 200 yards inside of Glacier National Park. Hagan and the two victims had been socializing at the Trailhead Saloon in East Glacier that night, and Hagan had consumed alcohol. The three left the saloon and traveled toward Two Medicine Lake with Hagan driving a Ford Escape. One passenger was in the front seat and one passenger was in the rear seat.

Hagan lost control of the vehicle, failed to negotiate a sharp left turn, went off the road and hit a tree. The vehicle spun and rolled and came to rest on the driver’s side. The front seat passenger was ejected and suffered severe injuries. The rear seat passenger, later identified as Paul Cadotte of Starr School, 40 years old, also was ejected, pinned under the vehicle, and died at the scene.

Hagan, the prosecution said, walked back toward his residence and called 911 on his cell phone. He reported there had been a crash and implied that he had come upon the scene and was otherwise not involved. He reported seeing one injured person but not his involvement, the cause or that a passenger had died.

The Glacier County Sheriff’s Office responded to the 911 call but struggled to find the scene initially because of the vague description Hagan had provided to the dispatcher. While looking for the crash, a deputy spotted a man, later identified as Hagan, walking along the road. Hagan did not try to flag down the marked vehicle. Deputies found the crash scene about two minutes later.

The injured passenger told officers there had been three people in the vehicle, which prompted law enforcement to look for Hagan.

Hagan told law enforcement that the front seat passenger had put him in a headlock while he was driving and that he was traveling at 30 mph. Hagan was eventually transported to the Indian Health Service where a blood draw determined his blood alcohol level was .093 percent.

The injured passenger told law enforcement that nobody was “horsing around” in the vehicle, but that he also did not remember most of the events of that night.

“Drinking and driving often ends tragically. We will prosecute those who do so to the full extent of the law to ensure that we keep our national parks safe. I want to thank Assistant U.S. Attorneys Kalah Paisley and Ethan Plaut, along with the National Park Service, Blackfeet Law Enforcement Services and Medical Services, the Glacier County Sheriff’s Office and the Montana Highway Patrol for investigating and prosecuting this case,” U.S. Attorney Alme said.