GLACIER NATIONAL PARK – The latest update from the Howe Ridge fire burning on the west side of Glacier National Park shows the blaze has burned an estimated 9,672 acres.

The new numbers show a decrease in size from the 11,200 acres on Monday. No explanation has been given for the change in the number of acres burned. 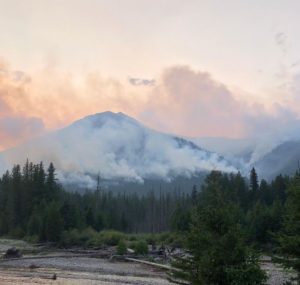 Behavior was moderate on the Howe Ridge Fire on Tuesday but the fire is expected to pick up again on Wednesday afternoon, according to fire managers.

Aircraft were used on the fire on Tuesday while on the north end of the blaze aerial ignitions were successfully used to straighten the fire edge, allowing it to slowly back off the lower slopes of Mount Stanton toward containment lines.

Equipment was also used to reduce fuel along the Inside North Fork Road in order to use that road as a containment line while structure protection crews continued to work around Fish Creek and North McDonald Road.

Glacier National Park and most of western Montana are under Stage II Fire Restrictions. No campfires will be permitted in Glacier’s frontcountry or backcountry. Smoking is also prohibited except within an enclosed building, vehicle, developed recreation area, or barren area three feet in diameter.