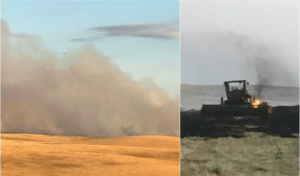 According to PVFD, crews were still monitoring several interior fires around 4:18 a.m.

On Saturday evening, cooler weather helped slow the fire to a crawl and allowed firefighters to gain some control.

The fire started on Friday evening due to a swather and was burning about 17 miles north of Poplar.

At last report, the fire was roughly 15 miles long and three miles wide and one residence had to be evacuated.