Firefighters back to work on Bannack Fire after artillery shells found

Firefighters were taken off the Bannack Fire Friday night after two artillery shells were discovered in the fire interior, according to Inciweb.

The Lewis and Clark County Ordinance Team conducted an inspection of the shells and determined they were spent 105mm illumination rounds from the 1940s. The report said the shells were used in nighttime warfare to light up battlefields.

The ordinance team cleared fire crews to resume work after establishing safety protocols. As of Saturday, fire crews have been instructed to flag and mark with GPS any ordinance they see and halt work in that area until it can be inspected.

The fire, burning about a mile south of Bannack, remains 151 acres in size and is 35% contained as of Saturday morning.

Approximately 70 personnel are currently assigned to the Bannack Fire. 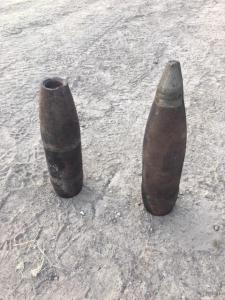