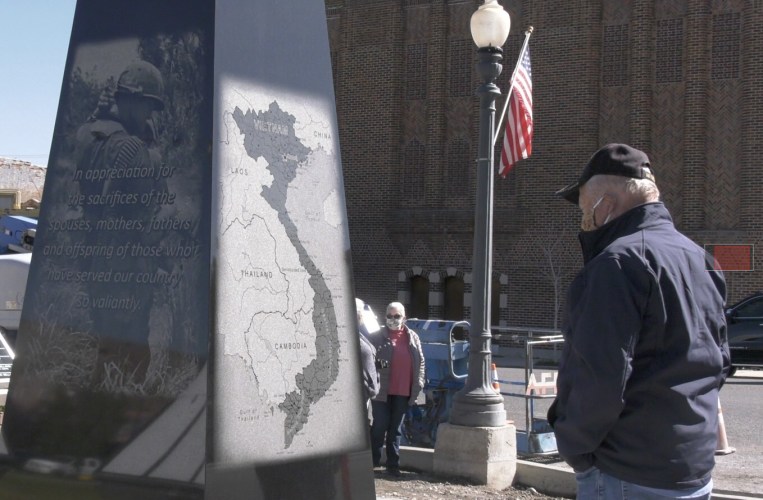 ANACONDA - A memorial honoring those from Anaconda who served in Vietnam, and those lost their lives over there more than 50 years ago, was installed at Kennedy Commons park.

“When I first seen it, it brought tears to my eyes, because I knew a few of these guys,” said Vietnam veteran Ralph Joseph Villa.

The names of eight young men from Anaconda who died in the conflict are engraved on the 10-ton black marble obelisk. Veterans who survived the war remember the sacrifice of their fallen classmates.

“That class of ’66 took a beating, and this is a real memorial to them and that class,” said former U.S. Marine and Vietnam veteran Paul Beausoleil.

John Aspholm, who also served in Vietnam agreed, “You almost feel guilty that you came back and some of these people didn’t. It’s a hard thing.”

Anaconda Vietnam veteran Mickie Nazer is credited for starting the project to get their memorial built more than a year ago. Through grants and donations, the Anaconda Vietnam Era Veterans Memorial Association was able to raise the $100,000 needed for the project.

For veterans of Vietnam, it’s a war that stays with them.

“You never come home totally, I don’t how to explain that to the normal individual, but it’s someplace you never leave,” said Beausoleil.

The old veterans say they're happy this memorial is set up here at the Kennedy Commons, a place where they used to play, long before the war, when they were young.

“These men here are us, they were young kids playing on this commons, some came home. Why did I come home and Pat didn’t? But it's one of those things, it’s a war, there’s no pretty war and we hope we never have to go that route again,” Beausoleil said.