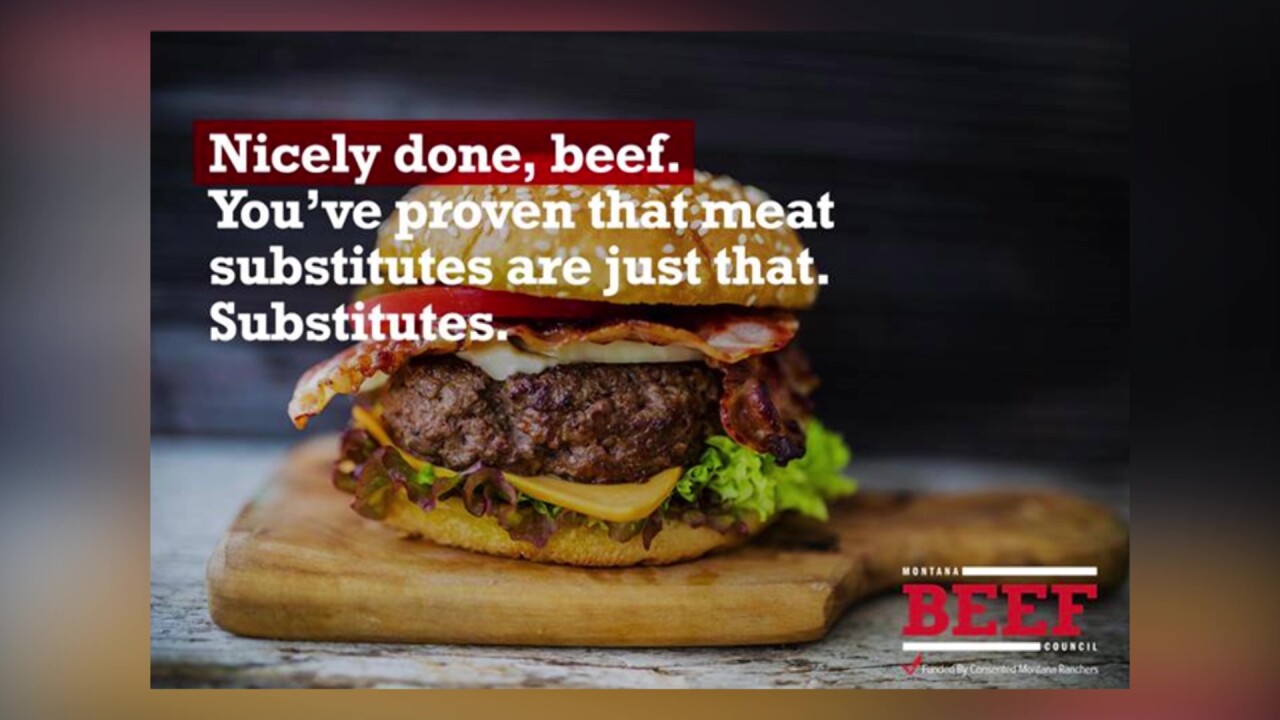 Here is the Montana Ag Network report for Wednesday, November 20, 2019:

#1 The Montana Beef Council is launching a new campaign to focus on the merits of beef. Focusing on the simplicity of one ingredient with multiple benefits. Three billboard locations were selected throughout the state to carry a simple message, “Nicely done, beef. You’ve proven that meat substitutes are just that. Substitutes.”

Montana Beef Council board member Travis Choat is cattle feeder from Terry. He said the campaign is just one of the ways the Montana Beef Council promotes and educates consumers here at home and across the nation. Specifically on with this campaign with addresses meat substitutes.

“To help consumers better understand the advantages beef has when compared with imitation plant-based proteins, as well as correct misinformation about beef production, the MBC board is working to make sure that beef is the number one protein choice for consumers, said Choat.

The billboards will appear over the next six months near Miles City, Three Forks and Missoula and are funded through consented beef checkoff dollars provided by Montana ranchers that have signed their annual consent form to allow half of their checkoff dollar to return to the Montana Beef Council for investment in projects by the local board.

“The campaign aims to inform consumers about the simplicity and wholesomeness of beef in a time when there are a number of other protein options available,” Choate added. “The beef checkoff’s flagship website, BeefIt’sWhatsForDinner.com remains a vital resource for today’s consumers to share a wealth of information ranging from cooking tips to cuts of beef and understanding the beef lifecycle to beef’s nutritional profile.”

All producers pay the $1 per head beef checkoff fee. But, unless they sign the Producer Consent form every year, your entire $1 stays on the national level and 50 cents can’t come to Montana to promote beef due the ongoing R-Calf USA vs. USDA lawsuit. To promote beef with your check off dollars, you can sign the form by visiting www.MontanaBeefCouncil.org

#2 Fewer and fewer days remain for Congress to pass the U.S.-Mexico-Canada Agreement in 2019. Washington is sending mixed signals on whether the deal can be completed this year.

Some lawmakers have suggested the House stay in session an extra week, adding time to the calendar to wrap up business before Christmas.

Representative Richard Neal, who chairs the Democrats USMCA working group, last week suggested union support was within reach, adding “we need it.” Democrats are skeptical that an agreement could be reached this year.

#3 Tyson will reopen a Kansas beef processing facility next month, following repairs prompted by an August fire that disrupted operations at the facility.

This week, Tyson announced repairs at the Holcomb, Kansas facility are nearly complete, and efforts to resume beef processing are planned for the first week of December. The company expects the plant to be fully operational by the first week of January.

The fire severely damaged a critical part of the plant containing the hydraulic and electrical systems that support the harvest floor and cooler areas. The fire disrupted cattle markets and processing as the facility reduced industry slaughter capacity by six percent.

A Department of Agriculture Investigation into beef pricing practices following the fire should wrap up by the end of this year.