HELENA – Last month, a fire department battling the massive Mendocino Complex Fire in northern California says its communications were slowed to a crawl.

The Santa Clara County Fire Department had an unlimited cellular data plan with Verizon. But once the agency went over a monthly threshold, leaders say the company began slowing down, or “throttling,” their data speeds to a small fraction of normal. 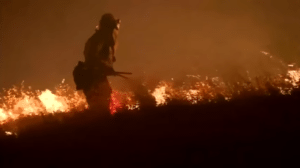 Verizon leaders quickly apologized for the incident, saying they have a policy of removing all speed restrictions in emergency situations.

The case drew attention nationwide, including in Montana.

“I’ve got a tablet in the command rig that maps where I am and where I’m going, that’s constantly updating,” he said. “I can flip and get aerial photography that’s going to show me, are there trees, are there fields, are there houses? All of that is just a data hog.”

He said agencies like his have a challenge: trying to predict how much data they’ll need, and balancing it against their budget constraints.

“I don’t want to pay for all that data every month on the off chance that we’re going to use it,” he said. “But when we need it, we need it.”

The Montana Department of Administration manages contracts between state agencies and communication service providers. Leaders say those contracts take into account concerns over access to data.

“There is an understanding in the agreements between service providers (including Verizon) and the State of Montana that public safety and emergency communications should not be subject to throttling,” communications director Amber Conger said in a statement. “At Department of Administration, we are not aware of this being a known issue from our perspective on the contract side of things.”

Leaders with the Montana Department of Natural Resources and Conservation, which fights fires on millions of acres across the state, confirmed they haven’t heard about any throttling issues either.

For local firefighters, each department has its own communications systems. Drake said the 18 agencies in the Lewis and Clark County Rural Fire Council pooled their resources to buy a satellite phone, but at $1 per minute, it is too costly to use it except for brief calls in emergencies.

The council also operates a mobile operations base. If a severe wildfire or other disaster occurs, leaders contact their service provider and ask to purchase a temporary plan with higher data limits.

“We managed it ourselves,” said Drake. “We were doing the same thing they were doing; we just never got throttled.”

Tri-Lakes VFD is now among the first agencies in Montana to join a government-sponsored network called FirstNet. The service, operated by AT&T, was created in response to communications issues during emergencies like Sept. 11. It provides a separate network, used only by first responders, and offers data plans with no limits or throttling.

Drake said agencies in the Billings area, Columbus and Red Lodge have also adopted FirstNet. He said AT&T is building more FirstNet towers around Montana, and he expects more departments will sign up in the coming years.

“It really truly is meant for the rigors of first responders and how we need it,” he said. “And when we need it, we need it today, and we need it unlimited.”

On Friday, Verizon announced in a statement that it will temporarily stop all throttling on service for first responders on the West Coast and in Hawaii, to support firefighting efforts and the response to Hurricane Lane. Company leaders also said they plan to introduce a new plan for emergency responders, with unlimited data and no caps.