BOZEMAN, Mont. – An MSU researcher is venturing into caves from Texas up to Montana to capture and collect data on bats.

“We’re trying to get baseline information, body mass, sex, weight, so that we can then use it to figure out what species might be most susceptible to white nose as well as what areas might be refuge and what areas might be hit hardest,” said Katherine Haas, MSU Wildlife Ecologist. 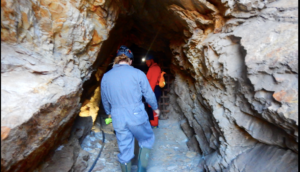 White Nose Syndrome causes a bat to burn through their fat storage more rapidly during hibernation which leads to death by starvation, according to Haas. She says the disease has decimated bat populations on the East Coast and she hopes the research will help management agencies, like Fish, wildlife and Parks, and conservation groups identify ways to protect Montana’s bat population.

Bats in this region contribute to the ecology by being natural pest control and therefore benefit the agriculture industry according to Haas.

She said the trip is largely funded by a Department of Defense grant but also has collaboration from environmental groups in California, Texas, Canada and New Zealand. Other researchers on the project are from Texas.

Starting in September the group of researchers will set out for two months to collect data and then resume their work in the winter. They hope to publish their findings in about a year.