Superior man dies after crash on I-90

A Superior man died after a crash in Mineral County on Tuesday.

The man’s name has not yet been released.

A Montana Highway Patrol dispatcher told MTN News that the crash happened at around 4 a.m. east of Superior. 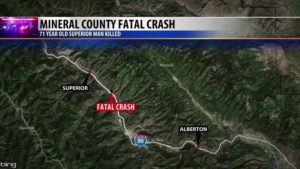 MHP reports that the 71-year-old man was westbound on Interstate 90 near mile marker 54 when his Toyota Tundra went off the road and into the median.

The pickup truck continued past the median guardrail, got caught on a bridge guardrail, and then went off the road between two decks.

It hit the embankment twice before eventually resting on the bridge pier support.

The man was able to get out of the vehicle but was later found dead by a passerby about nine hours after the crash.

No one else was injured, and the victim was reportedly wearing his seatbelt.

The MHP is continuing to investigate.