Wyoming man in jail after chase, spree of armed auto thefts and shots fired across Billings

BILLINGS- The man suspected of leading police on a high-speed chase through multiple parts of Billings late Monday night has been identified as Ryan McElmury, 41 of Wyoming.

Billings Police Chief Rich St. John said Tuesday in a press conference that McElmury has been booked into the Yellowstone County Jail on charges related to a string of alleged crimes, including burglary, armed robbery, vehicle theft and fleeing police pursuit.

St. John said a heavily involved pursuit lasted 50 minutes Monday night across areas of Billings. He said now officers are investigating 10 crimes scenes, where five vehicles were stolen—three of them at gunpoint.

He said no one was hurt except for the suspect.

St. John said it all started at 10:12 p.m. Monday when Billings police officers responded to a burglary report at Performance Auto on Laurel Road. 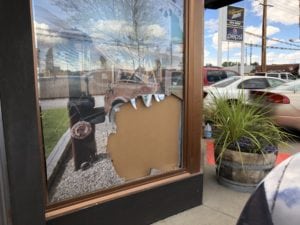 A window was broken, and St. John said two males were found inside. The officer “challenged” the suspects, St. John said, and one, identified by police as Jason Ebarb, 42, complied and taken into custody. The other, McElmury, ignored the police and ran east in between two businesses.

St. John said at this point, additional officers arrived and heard a single gunshot. St. John said that later officers learned that McElmury used the used a handgun to steal a Ford pickup.

McElmury is accused of driving the pickup through a fence and then he headed west on Simpson Street.

St. John said that officers chased McElmury west on Simpson Street. McElmury made a U-turn and headed straight for officer patrol cars. A Billings police officer fired his gun at McElmury as he drove past him.

At this point, McElmury is said to have headed toward two occupied trailers on Simpson Street. Those homes were struck with bullets. At this point St. John said he is unsure if those bullets were from the police officer.

McElmury then headed west on Laurel Road where he crashed through a fence in the pickup near Centennial Homes, a business that sells manufactured homes.

“He forced his way into the residence and confronts a female,” said St. John. “He sticks a gun in her face and demands car keys. She tells him there is a car in the garage.”