BILLINGS – A Glendive family is taking life in stride and holding onto parenthood as long as they can after their baby boy was born with a condition so rare, he’s the only male in the world with it.

TJ and Trista Brooks know the baby snuggles and tiny hand squeezes they get from their 7-month-old son, Braxton, won’t last long.

Still, Trista takes in every breath of motherhood she can.

“Even though he’s different, he’s special and we love him,” she said.

The Brookses reside in Glendive but haven’t been home for months. Braxton’s intricate condition requires top-notch care from children facilities in Denver and Billings.

Braxton was born half deaf, with no eyes and several heart defects. His condition is known as Ocular-Facio-Cardio-Dental syndrome. It’s a practically unknown condition with little research available to help the Brookses in their search for answers. 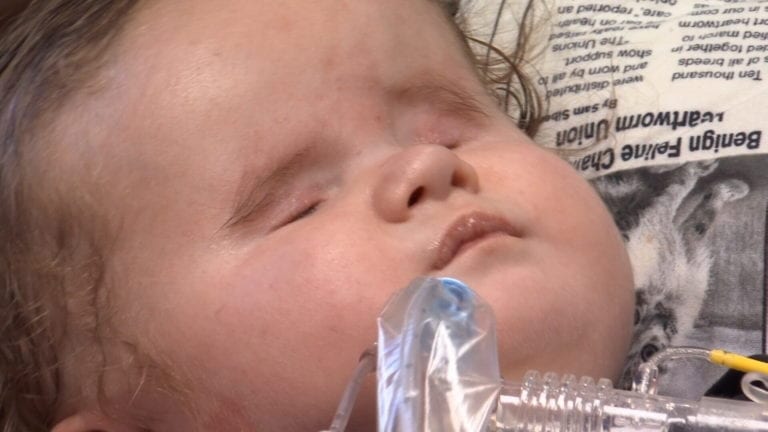 For them, recent months have been overwhelming, combined with a whirlwind of information and change.

But it wasn’t until Braxton was roughly three months old that the Brookses even knew what the syndrome was. Turns out, Trista has a mutated X chromosome but had no idea such a rare condition would surface.

“They had to test him, and it takes up to 12 weeks,” explained Trista. “They had to test it twice because that only happens in females, not males. So he’s the only male in the world that has this.”

There are only roughly 20 cases of Ocular-Facio-Cardio-Dental syndrome reported, and all involve girls. However, Trista and TJ said they were previously told about the condition in a little boy, but were told that baby only lived to be 8 months old.

Trista knew her pregnancy would be difficult, that’s because when she was a baby herself, she was born with a rare heart defect, so she wanted to know if her baby would also be at risk.

They went to Denver to prepare themselves with a team of NICU doctors and surgeons. Then in May, Braxton was induced weighing in at 3 pounds, 7 ounces.

Trista said he was full term.

Although, Braxton may have a rare condition he still needs around the clock care. Trista said his airwave folds on top of itself and a stent was placed in his little body to keep him going.

“He probably won’t make it past 4 years old,” said Trista.

So each breath and each moment counts.

“There are some moments it’s hard, some days we just take it day by day. I think when it gets closer to the end it will be even harder,” she said.

Unfortunately for the Brookses,  there is no chance of having additional children because they would be born with the same condition. So they are trying to enjoy every moment of parenting with Braxton that they can.

“I’ve been saving a lot of stuff and doing a lot of memory stuff. We do his feet prints every month that he’s born,” she said.

And apart from the normal baby things, the Brooks have endured a steep learning curve when it comes to caring for Braxton.

“We learned how to feed him and how to give all his meds. We’ve learned everything to take care of him,” said Trista.

She says it’s a routine they hope will last for while.