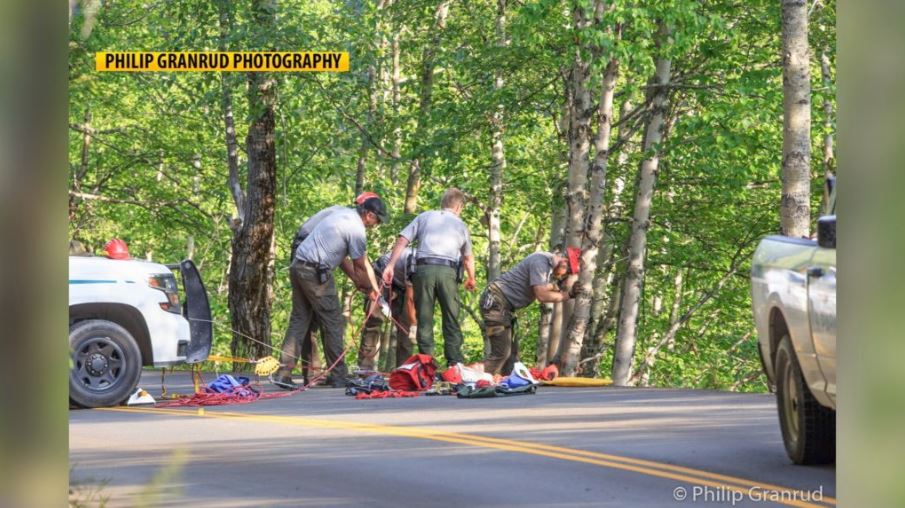 GLACIER NATIONAL PARK – Traffic was closed for hours on Glacier National Park’s scenic Going-to-the-Sun Road on Monday after a car crashed and went 40 feet down an embankment.

The park responded around 5 p.m. to reports of a vehicle down an embankment near Packer’s Roost, several miles below the Loop, according to park officials.

The vehicle had swerved to avoid another car stopped in the roadway to view a bear along the road.

Park rangers performed a technical rescue for the people in the car. Park sawyers cut down a number of trees so a tow truck could remove the vehicle.

The three occupants were transported to the hospital, two by ambulance and one by ALERT helicopter.

Hundreds of vehicles and multiple shuttle buses were delayed along Going-to-the-Sun Road during the crash response. Park dispatch received several calls from family members concerned about delayed visitors on the road.

It was a busy day in the park as rangers also responded to a call at Lake Josephine for a visitor who suffered an open ankle fracture after falling from a horse.

Rescuers carried the patient to the trailhead where an ALERT helicopter met them to take the injured rider to the hospital, according to a press release.

During the two incidents, the park also responded to a report of an infant locked in a car, two missing parties, a bear struck by a car on Highway 2 outside the park, a DUI arrest in Many Glacier, and an abandoned dog at Logan Pass Visitor Center.

Because of the number of cars on the road during periods of high visitation, even minor accidents along the Going-to-the-Sun Road can delay traffic for hours while law enforcement response or rescue efforts are underway.

Last year in early July, the Going-to-the-Sun Road was closed for several hours due to a vehicle collision at Triple Arches, according to the press release.

“Unexpected incidents in the park can have significant consequences for visitors,” said Glacier National Park Superintendent Jeff Mow. “Always carry extra food and water, even if you are not planning on hiking into the backcountry. You should always plan for the unplanned, including delays along the road or elsewhere.”

Glacier National Park law enforcement and emergency services incidents year to date are up 40 percent over 2018. Total calls for service are up 500 more calls year-to-date over 2018 figures.