It happened along Highway 2 on the Blackfeet Indian Reservation. 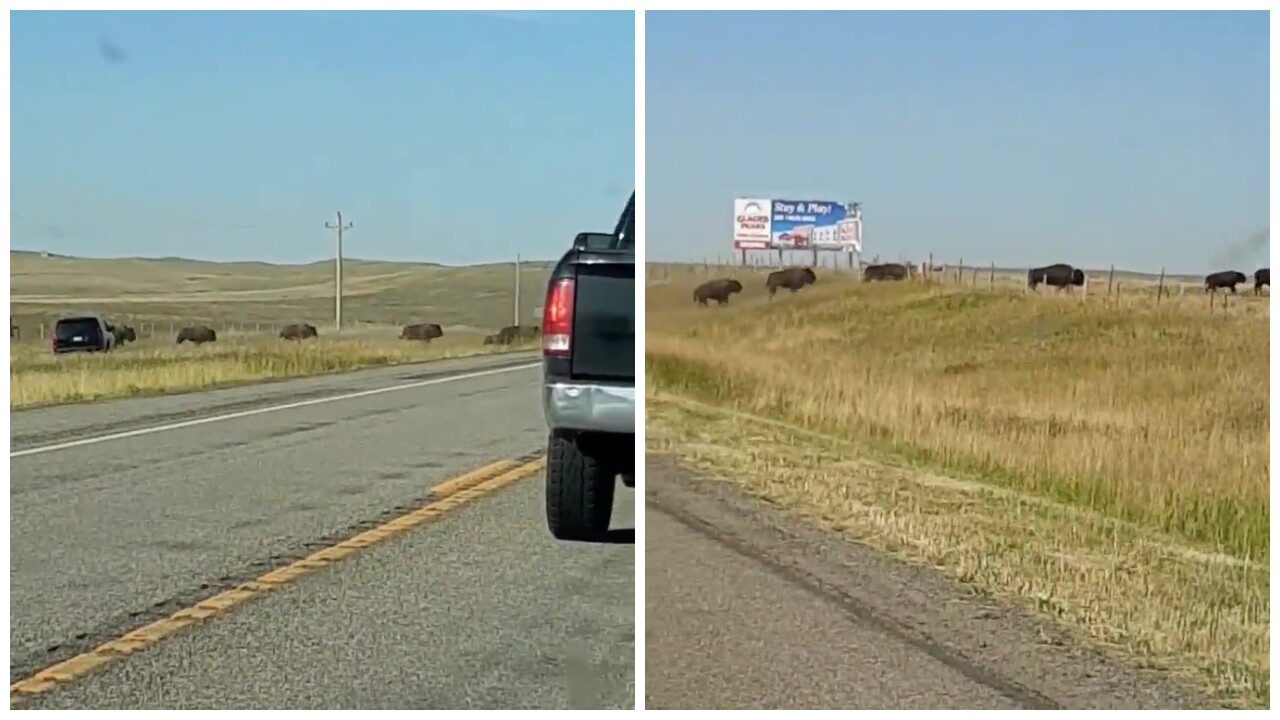 Debra Linn was driving home to Great Falls from Glacier National Park on Thursday when she came across a "bison crossing."

It happened along Highway 2 on the Blackfeet Indian Reservation.

Debra said that BIA had the road blocked to allow for safe passage of the bison.

As Debra narrates, she noticed that one very young bison was lagging far behind the others, and what appears to be the mother turns back and urges her baby to keep going.

Thank you to Debra for sharing this video with us!

(NOVEMBER 3, 2018, reported by Joe Huisinga/MTN News) Bison are an icon of the west, but for generations the animals have been largely absent from western Montana and the Blackfeet Tribe that once depended on them.

“They were our economy in the beginning, they were our food, our clothing, our lodging, and our tools. They provided for us in that way,” said Ervin Carlson, manager of the Blackfeet Bison Project.

According to Carlson, the Tribe now has more than 600 bison in a herd meant to revive that economy by selling meat while also providing healthy food for elders and the sick.

There is also a smaller herd meant for a bigger purpose.

“The cultural significance of them is the big push behind the Iinnii Project,” said Carlson.

The project aims to reestablish iinnii, the Blackfeet word for buffalo, as free ranging animals on the reservation and historically tribal lands in Glacier National Park.

“This is not a bison herd as in a domestic herd, but this is actually bison as wildlife,” said Park Superintendent Jeff Mow.

The Tribe is working closely with Glacier National Park and a handful of State, Federal, and Canadian agencies to allow bison free passage between Glacier, Waterton Lakes National Park, and tribal lands on both sides of the border.

“Everybody’s working pretty cooperatively together and I really want to see it happen,” said Carlson.

The cooperation is helping to transform the relationship between the Park and the Tribe.

“Instead of sitting across the table with the Tribe, we’re actually sitting around the table thinking about how we’re going to manage this wildlife in a shared area for this shared vision,” said Mow.

This shared vision means the return of grazing bison to grasslands in the Chief Mountain and Belly River area of Glacier where the bison have not roamed for more than 100 years.

“There will be transformation of landscape in Glacier National Park, but we believe that it will be a transformation that will take it back to what it was like when there were natural free ranging bison on the landscape,” said Mow.

The bison destined for this freedom are genetic descendants of calves captured and sold from the area in the 1870’s.

The bison of this herd were eventually sold to the Canadian government, who established them in Elk Island National Park.

In 2016, bison calves from that herd were returned to the Blackfeet and Carlson believes this shows the spiritual power of the bison.

“They were taken from here as calves and they wanted to return as calves,” he said.

Discussions on how the free ranging bison will be managed are ongoing, but Carlson and Mow agree that bison in the Park are still several years away.

For more information about the project, visit the Iinnii Buffalo Spirit Center website .