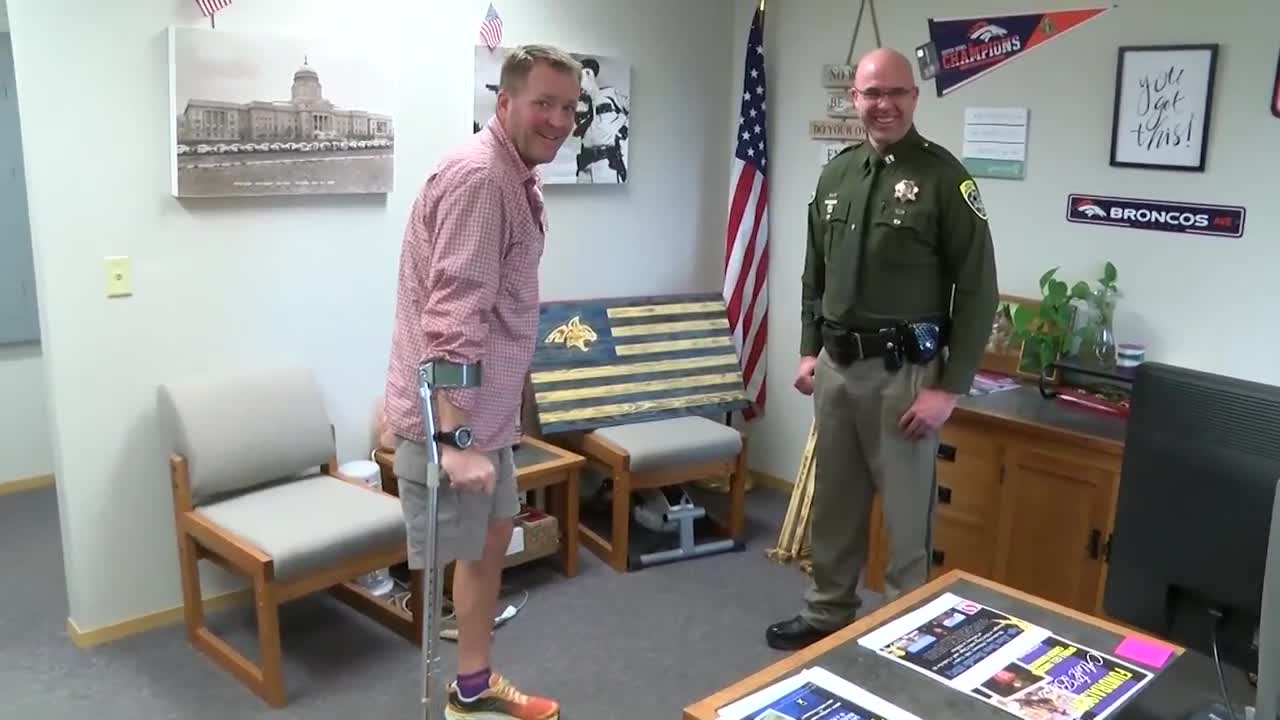 The community has already begun to rally around Betz and his family. On Wednesday Feb. 19 at 11;00 a.m., Safeway in Helena will be holding a Benefit BBQ, and West Valley Fire will have a BBQ and live/silent auction on March 28 at 4:00 p.m.

“It’s overwhelming the support,” said Betz. “I don’t know how to thank people. It’s a real struggle for me because I don’t think ‘thank you covers it enough.”

The 20 year MHP veteran was diagnosed with spindle cell sarcoma in his right thigh just after Christmas.

The tumor was the size of a football and doctors said the best shot at preventing the cancer from spreading was to remove his leg.

Betz is in good spirits, but says it’s been hard adjusting to the new normal.

“It’s pretty devastating,” said Betz. “We all have plans. This is what I’m going to do, this is how things are going to be in the future. My job being a uniformed officer and all that, I’m not able to do that anymore. My plans have changed.”

An avid hunter and outdoorsman, he also served 22 years in the Army National Guard, including a two year deployment in Iraq.

During his tenure with MHP, Betz worked at the Montana Law Enforcement Academy and helped train hundreds of law enforcement officers.

One of those students was MHP Cpt. Kurt Sager.

Sager told MTN Betz has always been a shining example of an MHP trooper.

“My first interaction with him, and this isn’t just blowing smoke, I remembered when he walked in and going, ‘That’s what a highway patrolman looks like,’” said Sager.

Sager worked closely with Betz over the years, and says the MHP sergeant has always committed himself to the service of others.

“He is truly a servant,” said Sager. “His whole life has been about service. Whether it be military, highway patrol, friends, family, it’s what he does. He always thinks about everyone else above himself, and worried about how much of an inconvenience he might be.”

Betz says he is grateful to have had the opportunity to be a MHP trooper.

“I’ve had 20 years in the Montana Highway Patrol and it’s the best thing that’s ever happened to me,” said Betz.

Over the years Betz has helped stranded motorists, herded cows off the interstate in subzero temperatures, and pulled countless drunk drivers off Montana’s roadways.

“I’ve stopped a lot of people who should not have been driving,” said Betz. “Who knows who I saved right? You can’t count it because nothing happened, and that a good thing. Everyone was able to get home safely.”

While the prognosis looks good, he will still need to make regular trips to Salt Lake to be fitted for a prosthetic leg and rehabilitation to learn how to walk again.

MHP told us Betz will have a job with Highway Patrol as long as he wants it.

Betz said he is incredibly thankful for the support he’s received from MHP and everyday Montanans.

“The biggest thing I’d like to do is just say thank you,” Betz. “ I know sometimes there’s bad situations I’ve been in, but for the most part we’re just dealing with good people that may be having a bad day. I hope that maybe I’ve been able to help those folks. It’s been a pleasure, it’s been an honor to be able to serve. It really has. That’s what is so hard about this. I had planned to serve as an uniformed officer for probably seven or so more years and this has affected that a little bit.”

More information about how to support Sgt. Alex Betz will be posted on the Montana Highway Patrol website.