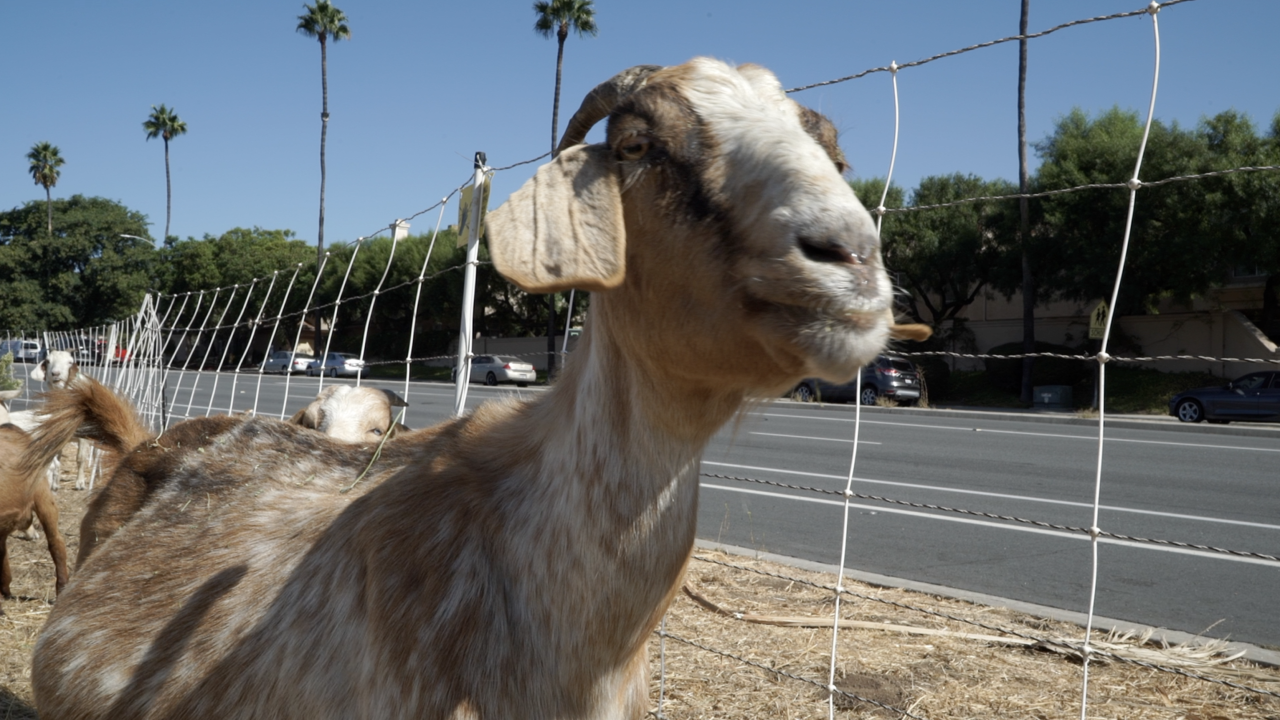 “We know that they can get exponentially large very quickly,” James Marugg, division chief for San Miguel Fire and Rescue in California, said.

Those on the front lines like Marugg say each year, the blazes seem to get more destructive.

Defensible space is the area closest to a building, which is cleared of vegetation to help slow the spread of the flames.

Now, firefighters out west are getting some much-needed assistance in getting rid of some of that vegetation, from a team that’s hungry to help.

Gonzales showed us a herd of almost 300 goats. It's not a petting zoo, but a work zone.

“I see it as a work zone,” he said. “They’re coming in here and eating what we consider flash fuels. And that's basically broadleaf weeds, grasses, brush.”

It's all that stuff you can see in between the trees in a field. The difference between before and after is noticeable.

“Our goal is to bring back nature into the equation of fire control,” Gonzales said. “We’re not raising these goats to go to the market. These goats are true urban foresters if you will.”

Hundreds of goats, right near the road and adjacent to homes.

“Goats, depending on the time of year, can eat about 7 to 12 percent of their body weight,” Gonzales said.

On this current project next to Cuyamaca College, the goats are getting through about an acre a day.

“Our college actually sits on 165 acres of wildlife, and yet, you can see it’s completely overgrown. There’s non-native dry brush, and just a few weeks ago before the goats were here, we actually had a fire on campus,” Nicole Salgado, interim vice president of administrative services at Cuyamaca College, explained. “It poses a risk not only to our college but the surrounding community.”

Hiring the goats just made sense for them, cost-wise.

“To have the goats here, it’s 30 percent less than that of a human crew,” Salgado said.

“You're as safe as your neighbor, and then it turns into you’re as safe as the block and your community. We’re now a whole state that's in need of fire fuel mitigation,” Gonzales explained.

It helps out firefighters when it comes time to put out flames. Less dry brush means slower spread of flames.

“You harden your house to keep a burglar from coming in, you need to do the same with wildfire. You need to look at it and think what are my vulnerabilities,” Marugg said.

There’s also another trend he said is impacting the number of homes we lose to fire.

“There’s more houses in the woodland area and we have to respond to them quicker, otherwise we lose more homes,” Marugg said.

“Each year, the limits for the development lines still get higher and higher. More homes are being built in the mountains, Essam Heggy, a research scientist at the University of Southern California, said.

“Our visual understanding of the environment we’ve been living in, in many places have been [associated] to the malls we visit and not to the environment that’s surrounding us. This disbelief in the complexity of our environment is the main driver of these hazards."

As we near the end of wildfire season, Gonzales and his herders continue to clear up the spaces they can year-round, in a sustainable way.

“I see this in the future becoming as common as trash pick up,” Gonzales said. “They really may be historically, and in the future, one of the greatest things of all time for fire fuel mitigation.”