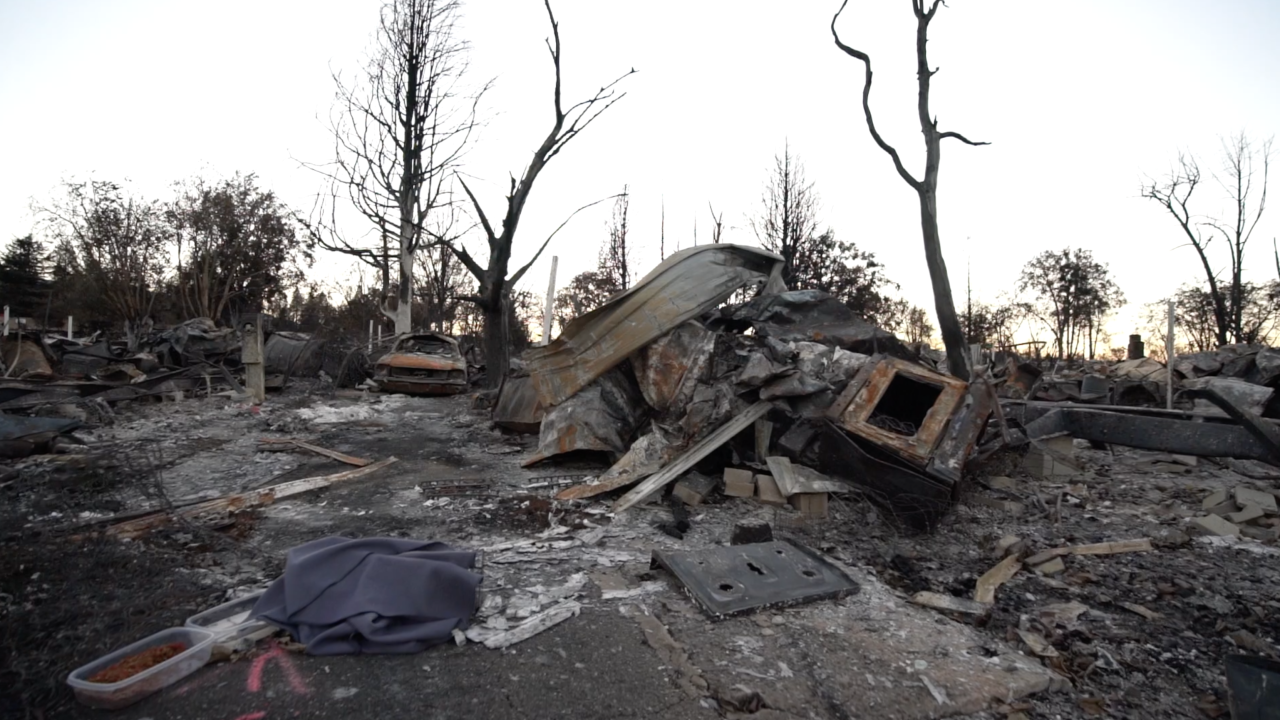 Anael Sanchez is walking over the rubble of what used to be his home in Phoenix, Oregon.

"It was crazy," Sanchez said.

He lost his home in the wind-driven Almeda fire which tore through four towns in the Rogue Valley of southern Oregon.

“It was so thick, the smoke. You could hardly see far away," Sanchez described.

Two of the towns, Phoenix and Talent, are home to a large Latinx immigrant population. Sanchez is originally from Mexico but has lived in the area for more than two decades. Since he lost his home, he says many local grocery stores, organizations and the Red Cross have helped him with basic needs.

One organization helping is Unete, a nonprofit organization that supports farmworkers and immigrants in southern Oregon and across the nation.

“The extra challenge that the immigrant and the farmworker has is the income,” said Dago Berto Morales, director at Unete.

According to Morales, the immigrant community in the area was already facing large disparities and an affordable housing crisis. The fire made it worse.

“We’re asking the government or local communities to try to find a solution for the housing crisis,” Morales said.

With wildfires raging throughout the western U.S., the Federal Emergency Management Agency (FEMA) is providing rental assistance, home repair, low-cost loans and other programs for eligible residents. As a legal U.S. citizen, Sanchez could apply. But he says he won’t, knowing many of his friends and neighbors are undocumented.

To protect his identity as an undocumented immigrant, another man who lost his home has asked that we not share his name. He was living at what used to be the Phoenix Motel.

“Por aquí yo entraba todo los días. Este era el cuarto por aca. Allí están las camas.” (Translation: "I entered through here every day. Over there was our room and those were our beds.”)

He’s an agricultural worker in the area.

He says he was in shock after seeing the devastation from the Almeda fire.

“Como le digo me fui, todo estaba normal. Regreso y veo todo así. Como le digo pues no más al principio no la creí aquí vivía yo. Y casi nunca salgo y ese día a salí.” (Translation: When I left, everything was normal. When I returned, I saw everything like this. At the beginning, I didn’t believe that I lived here. I never go out, but that day I did.”)

He lost important documents like his passport and title for the car, but he says he’s thankful he still has his job.

Both he and Sanchez are remaining strong.

“Sitting there and crying is not going to help me at all," Sanchez said. "It’s sad like I said, it’s really sad, but life keeps going.”

They say they’re ready to rebuild their lives because they’ve done it before.

“I’ve lived a hard life, so I know the pain. I’m used to the pain," Sanchez said.

Sanchez says his positive and sometimes sarcastic attitude is what pushes him forward.

“That’s where the kitchen used to be. I’m trying to find my favorite cup, coffee cup,” Sanchez said in a sarcastic tone.

You can donate to Unete's Fire Relief Fund here

If you are an undocumented immigrant seeking assistance after losing a home to a wildfire, here is some helpful information from FEMA:

Do you need to be a U.S. citizen to apply for assistance from FEMA?

You must be a U.S. citizen, non-citizen national or Qualified Alien for a cash award from the FEMA’s Individuals and Households Program or from Disaster Unemployment Assistance. You may, however, apply on behalf of another household member, including a minor child, to qualify the household for assistance.

What help is there for people who are undocumented?

Even if you do not, or your family does not, qualify for FEMA cash assistance (Individuals and Households Program), FEMA can refer you and connect you to other programs that can assist you regardless of your immigration status. We work in partnership with local voluntary agencies such as the Red Cross, and these resources are available regardless of immigration status.

Are there any repercussions for undocumented immigrants if they try to file for assistance?

FEMA will not proactively provide applicant information to immigration or law enforcement organizations. However, in rare circumstances, based on a specific request, a FEMA applicant’s personal information may be shared within the Department of Homeland Security.