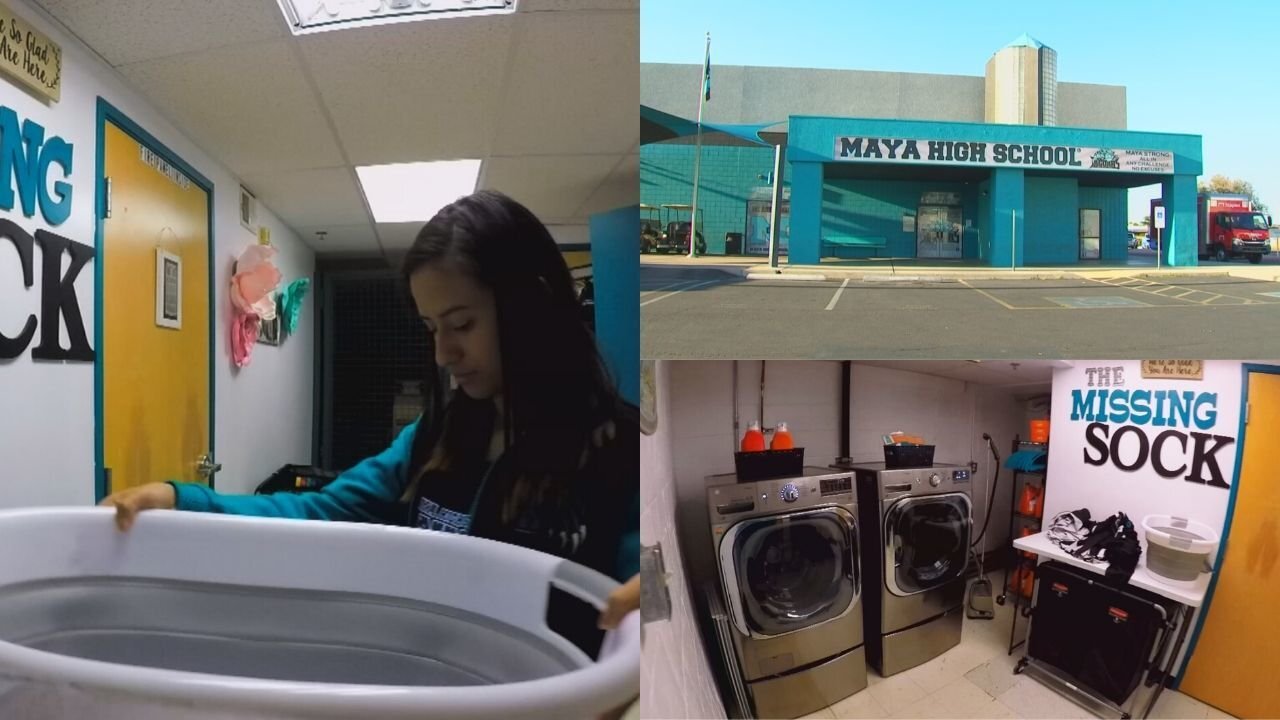 PHOENIX, Ariz. – In the back of a Phoenix strip mall sits an old movie theater, now converted to a high school. But it's not your ordinary school, Principal John Anderson told KTVK.

“Maya High School is an alternative high school. We serve a population that struggled in other school settings," he said.

Anderson says many of his students struggle with things other teens take for granted, like basic housing.

“Over 30% of our students are categorized as homeless," he said. "They may have slept in a park or slept on a friend’s floor or couch -- on a nightly basis.”

On top of all of that, Anderson noticed a new problem. Students did not want to come to school because they didn’t have clean clothes.

"I relate to a lot of them," former Maya student Andreya De La Torre said. "I come from a homeless background, sleeping in abandoned buildings, having no clothes, washing the same pair of clothes every single day. ... But coming to school smelling, kids don’t want to be by you. They are talking about you. And it’s just really hard to focus on your education when you are focused on your self-esteem.”

For Anderson, it was one former student's determination to conquer his family's bad situation that moved him to act. Anderson describes talking to the student in his office.

“It was when I offered him the detergent and the quarters and what not he said, 'They just don’t care.'"

"And I thought to myself, 'Here’s this young man who is coming to school smelling like cat urine, knowing that as a high school student -- a teenager -- he just wants his diploma so bad that he’s willing to do that.' It tore me up and it was the final kicker to seek out getting a student-access laundry room in our building.”

Anderson says he tried tackling the problem in different ways, but with budgets being tight, he went the grant route. That’s when he said some big-time partners stepped forward. Along with the Leona Group, which manages the school, the Arizona Diamondbacks and the Fiesta Bowl came through with all the cash to make it happen.

An old closet just off the cafeteria is the new student hot spot, according to seniors Stephanie and Anntania. They explained how it changes their classmates.

"I would say it builds up their self-esteem quite a lot because they would talk with someone and say, 'I don’t have a laundry at home. Can I bring some here?' Instead of worrying about someone talking about you because you smell bad and you don’t have to ask someone to borrow clothes you can just wash them here.”

De La Torre, who now serves in a variety of administrative roles at Maya, says, "We offer them more than academics. We offer them life skills to teach them things that someone is probably not teaching them on the outside of here and to show them love.”

Anderson agrees, saying, “We make them believe in themselves and to want to do it for themselves. The laundry room has created a buzz. Students know that we put our money where our mouth is as far as Maya being a community and saying we are all in."

Being "all in" isn't just a saying at Maya. It's daily life.

"We’re going to take on any challenge and we’re not going to make any excuses together as a community," he said. "I don’t look at it as a handout. It’s a hand up. These kids are survivors; they’re fighters.”