Five of the court’s seven justices signed the one-page order, which said the court will issue a full opinion “in due course.” 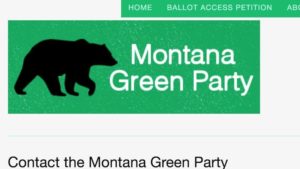 The order comes just two days before the Montana secretary of state must certify the November ballot for printing.

Secretary of State Corey Stapleton had appealed the July 9 ruling from state District Judge James Reynolds of Helena, who invalidated 82 registered-voter signatures submitted on petitions by the Green Party to qualify for the ballot.

Once those signatures were invalidated, the Green Party did not have enough signatures to meet a minimum threshold in at least 34 state House districts – a “distribution” requirement in state law for parties to qualify.

The Green Party still has its own legal action pending: A lawsuit filed last week in federal court, saying Montana’s distribution requirement is an arbitrary, unconstitutional barrier for smaller, unestablished parties to qualify for the ballot.

Tuesday’s ruling comes on a lawsuit filed this spring by the state Democratic Party, challenging Stapleton’s decision to qualify the Green Party for the ballot on the last day that candidates could file, in March.

They will not appear on the fall ballot – unless the federal court reinstates them.