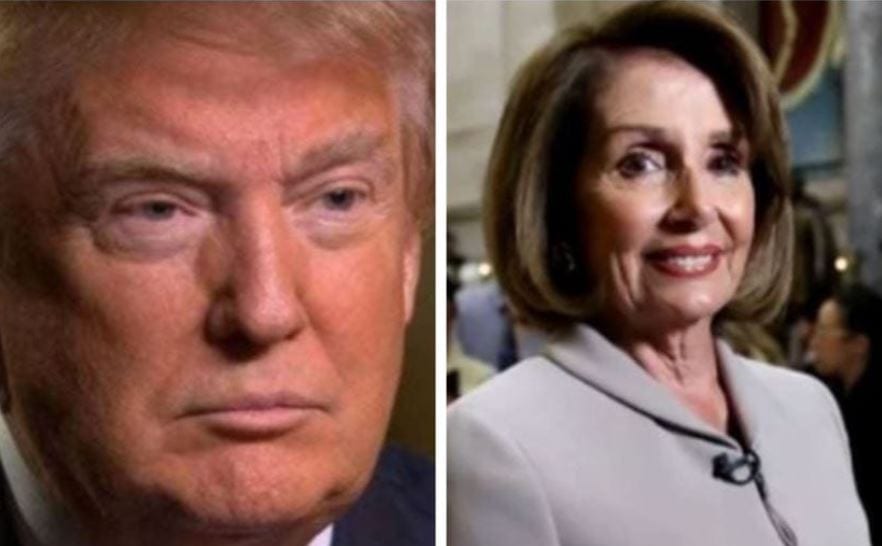 President Donald Trump responded Thursday to House Speaker Nancy Pelosi’s letter suggesting they reschedule his State of the Union address by informing Pelosi that an apparent trip she had planned to “Brussels, Egypt, and Afghanistan has been postponed” while the government shutdown continues.

It was not immediately clear what trip Trump was referring to as Pelosi had yet to publicly announce a trip to those countries, or whether Trump has the authority to prevent the California Democrat from traveling abroad on government aircraft.

The White House released Trump’s letter to Pelosi, a day after the House speaker had sent the President a letter suggesting they reschedule his planned State of the Union address scheduled for later this month until the government shutdown is resolved.

“Due to the Shutdown, I am sorry to inform you that your trip to Brussels, Egypt, and Afghanistan has been postponed,” Trump wrote Pelosi on Thursday. “We will reschedule this seven-day excursion when the Shutdown is over.”

The President of the United States has the authority to direct the Defense Department to not use military assets to support a congressional delegation to military theaters. This support includes air transport and additional security procedures.

It was not immediately clear whether the Defense Department was notified of the decision prior to the President’s announcement.

Trump’s penned retort amounted to his first public response to Pelosi’s Wednesday letter in which she wrote: “I suggest that we work together to determine another suitable date after the government has re-opened for this address or for you to consider delivering your State of the Union address in writing to the Congress on January 29.”

Trump’s response did not address the scheduling of his address to Congress and the White House has yet to say what the President plans to do about the State of the Union.

Instead, Trump delivered a tit-for-tat response.

Just as Pelosi pointed to security officials working without pay as a reason to delay his State of the Union address, Trump said he was postponing Pelosi’s trip “in light of the 800,000 great American workers not receiving pay.”

Trump also used the letter to jab at some of the time Pelosi has spent outside of Washington during the shutdown, saying that “it would be better if you were in Washington negotiating with me and joining the Strong Border Security movement to end the Shutdown.”

Even though Afghanistan — an active US combat zone — was one of the countries on her planned itinerary, Trump suggested she fly commercial.

“Obviously, if you would like to make your journey by flying commercial, that would certainly be your prerogative,” Trump wrote.