Early Winter Snowfall Hit or Miss Across the Treasure State 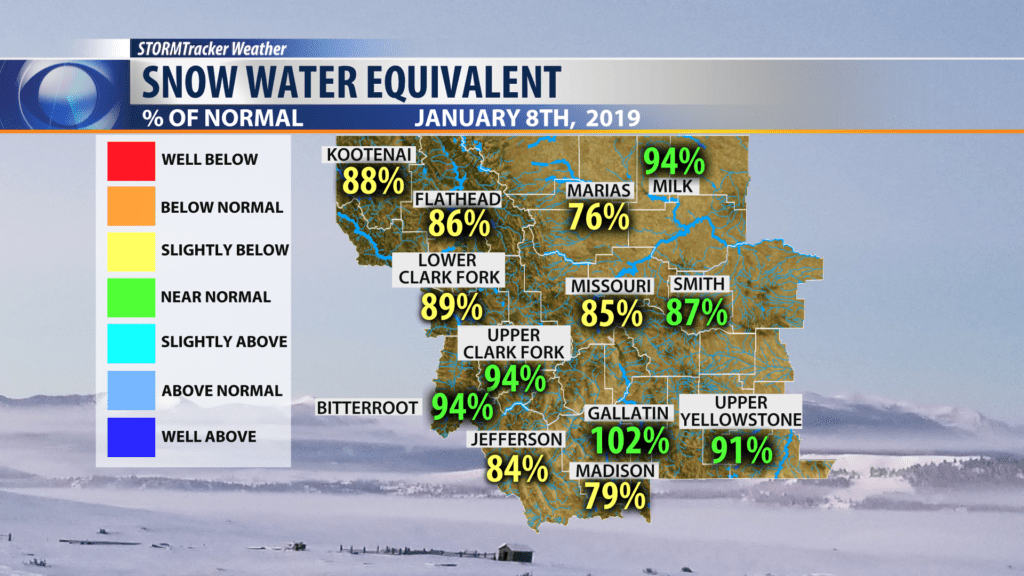 BOZEMAN, Mont., January , 2019 -After last winter’s record setting snowfall, the mountains across the state of Montana have received sporadic snowfall so far this year, leaving some river basins near normal for snowpack, while others are below normal on January 1. Early season snowfall has favored regions along the Continental Divide in western and south-central Montana so far this winter, and this is where the highest snowpack percentages can be found.

“What’s been unique about this winter so far is that the snowpack in these regions would be below normal for this date if it weren’t for the storm that dropped significant totals during the last week of October into early November,” said Lucas Zukiewicz, hydrologist for the USDA Natural Resources Conservation Service. “Many areas that were overlooked by the early November weather remain below normal for snowpack at this time, except for some regions of western Montana along the Idaho border which received heavy snowfall during the latter half of December.”

“After a long and hard winter of shoveling and shivering last year, it’s been a mild winter so far this year,” Zukiewicz said. “While that’s nice in some ways, it’s the cold snowy weather during winter and spring that assures our water supply when it warms up in the summer.”

Long-term weather forecasts by the National Weather Service combine the effects of long-term trends, soil moisture, and, when appropriate, ENSO (El Nino Southern Oscillation). “Forecasts issued for the month of January aren’t painting a pretty picture of things to come and are calling for above average temperatures and below average precipitation,” he said.

Currently ENSO-neutral conditions are present, but El Nino is expected to form and continue through the Northern Hemisphere during winter of 2018/2019 (~90% chance) and through spring (~60% chance). “It should be noted that a single climate index to predict future snowfall before runoff isn’t always the best idea, as other climate conditions such as the Artic Oscillation can impact week to week weather patterns,” Zukiewicz said. “That being said, it would still be wise to keep this in mind as we get further into winter, as it will certainly play some role in the weather patterns over the coming months.”

Reservoir storage across the state is above average in many basins due to abundant runoff last spring and summer. Zukiewicz said this could prove to be important should the weather take a turn to the dry and warm side through the rest of winter. The NRCS Montana Snow Survey will issue its next Snowpack and Water Supply Outlook on February 1.

Monthly Water Supply Outlook Reports can be found at the website below after the fifth business day of the month: